Aggressive Turkey
Musings on turkey aggression and behavior
What's going on in that dinosaur head? 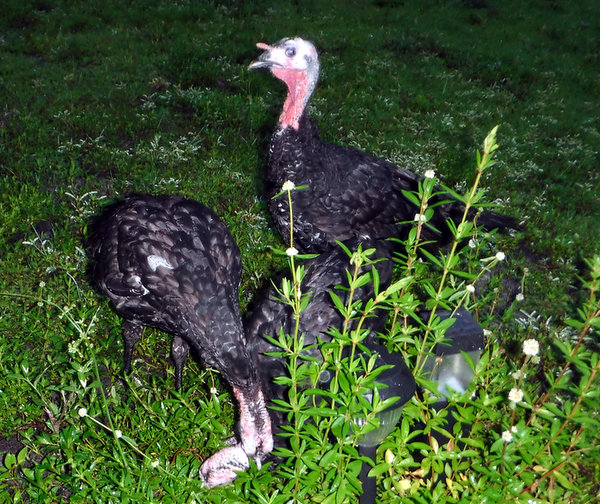 Note the one with the red face? When there are no other indications of gender identification, the bright red face indicates he is a young male and the two others are hens. Males will often try to break up hen fights.

The number one email question I get is "Why did the wonderful pet turkey that I raised from this affectionate little puff of feathers, just turn on the......"

turned on the dog,

is fighting her brother or sister

and various combinations of the above...... 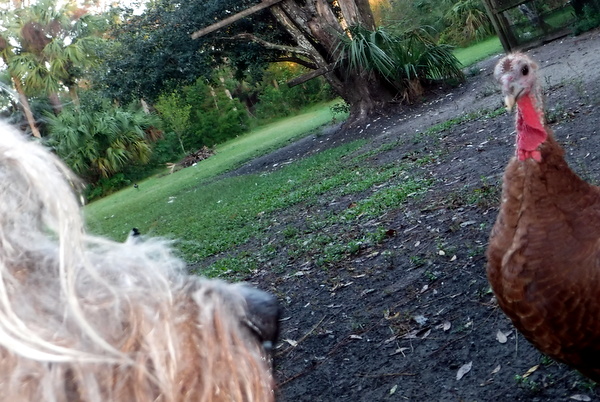 Since this just has happened to me, with a turkey hen I hand raised- I think my email responses are validated. Most of the problems with turkeys have to do with imprinting.

In the above picture,  you can tell "Red Bird" is working herself up with an attitude towards Rocky (who is not a turkey by the way) and helped raise the red troublemaker. 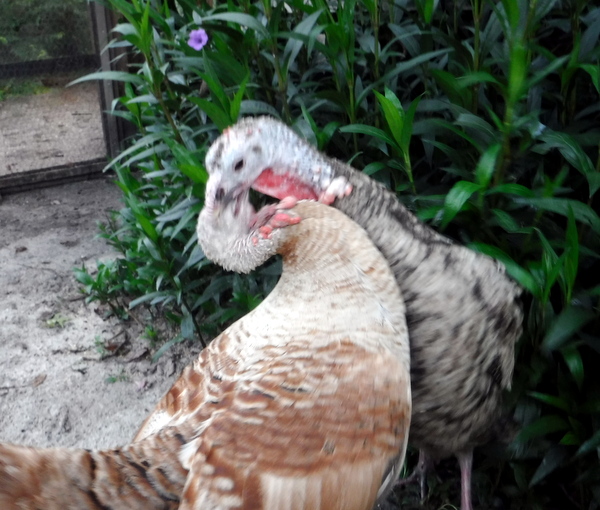 The turkey hens normally only fight about once a year to establish the alpha hen, or when a new hen is introduced or has been away on a nest.  The fights are brief and rare. No harm done except for once when a snood was pinched.

Normal turkey tom behavior: Ah, the turkey males: Peaceful loving creatures-Pacifists really-No fighting mostly until an 'upstart' tries to move up in flock status......and then its war. Fighting can be once a year or once a month, or.... Anyway once a dominant male is established as king, things settle a little.

By the way, that is in the normal heritage or wild turkey flock. In the crowded turkey farms, there is constant confusion as to who is the Alpha and this causes great consternation and higher levels of aggression.

Sort of like the English Civil wars: Monarch unknown? "Well let us war about it"

Why are they fighting?

The common factor with animals that humans have successfully domesticated, is they are social animals.

Animals that are solitary by nature, say for example wolverines, moose, yetis, great white sharks, --somewhat less success in domestication. There has been some minor moves in domesticating Grizzlies and Scotts, however common sense warns that should be avoided.

Point being, that social animals have social status interactions, French Revolution for example, and as a very successful survival strategy- the flock, herd, tribe or pod, social order is attempted to be maintained. And reproductive rights are often the sole pervue of the Alpha male and female. (Think NBA players) 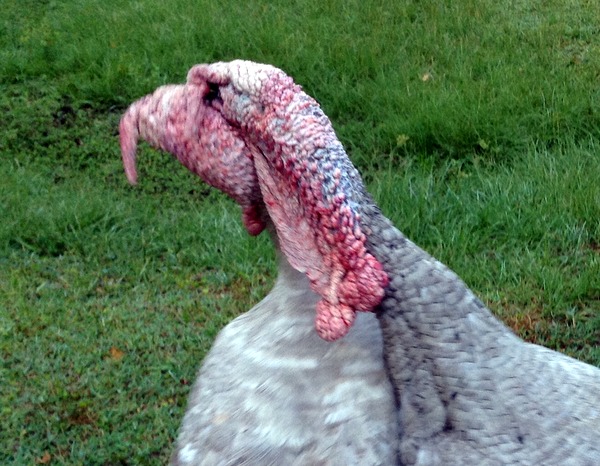 With many of the social animals; the group, whatever it is called has a leadership structure. Often termed as "Alpha" (I say structure, for often the Alpha leader will have minions to assist in controlling the group)

And then the upcoming Alphas will assist the leaders, waiting for their turn and fighting any interlopers.

Or as I watched last January, a group of four eager teenage turkeys, working together as a gang overthrew the reigning king in a bloody and exhausting fight. ---Oliver Cromwell comes to mind (You know, that English fellow who killed more Irish than the great potato famine?) but I digress......

So anyway, I just wanted to point out, that turkeys like other social animals strive to find or establish their position in the flock. It could be instinctive-not sure.

Consequently teenage turkeys, like teenage humans can be trouble makers for they are unsure of their status in the world. As well as being flooded with hormones.

And I still chuckle, that wild turkey hens run off their teenage sons because they are noisy and combative trouble makers. (Think that is why I joined the USAF)

So anyway, combine unsure, hormone raging birds with Imprinting and there could be problems. A more general explanation of at this link imprinting.

Imprinting is the irreversible identification of an animal's species- a combination of instinct and learning that with turkeys and chickens happen in the first day or two. 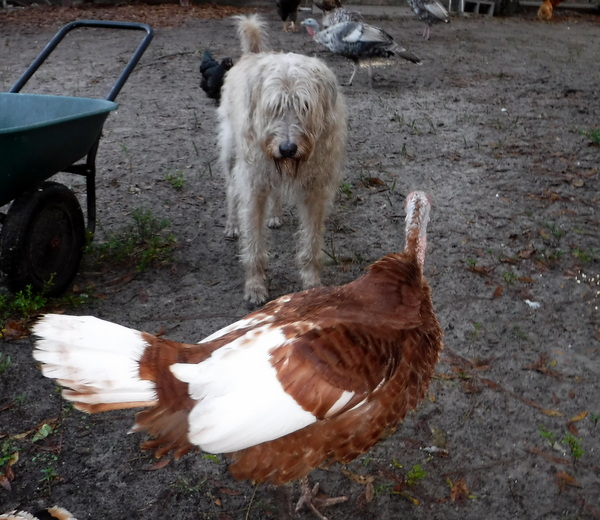 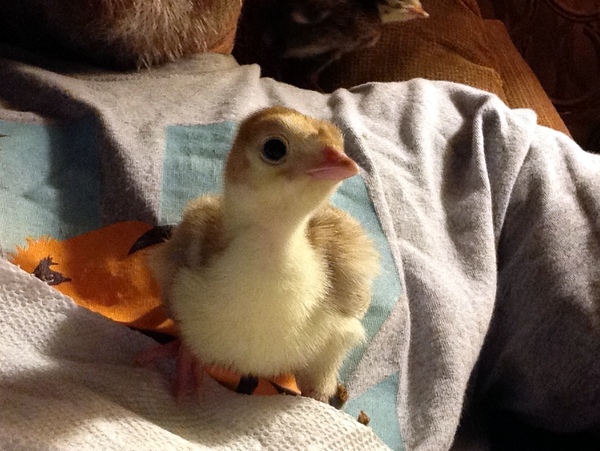 Red Bird as a poult. I purposely raised her for two weeks so she would imprint on us (and the dogs) and then I slipped her under a mother turkey with new hatched poults. 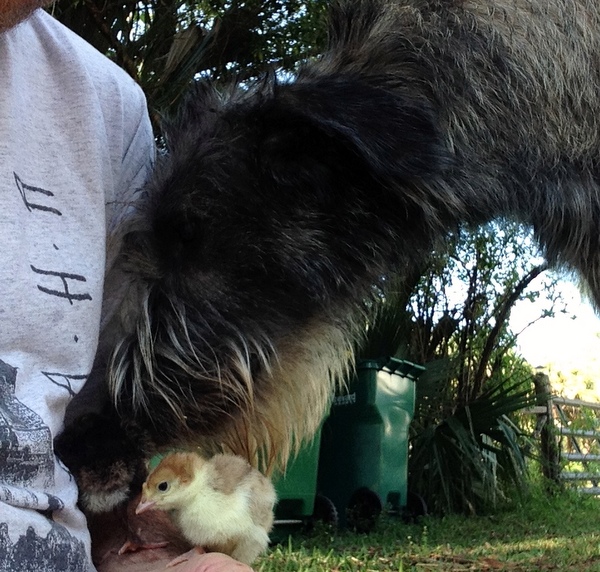 -trying to teach the puppy not to harm the birds and the turkey not to be afraid of the dogs. 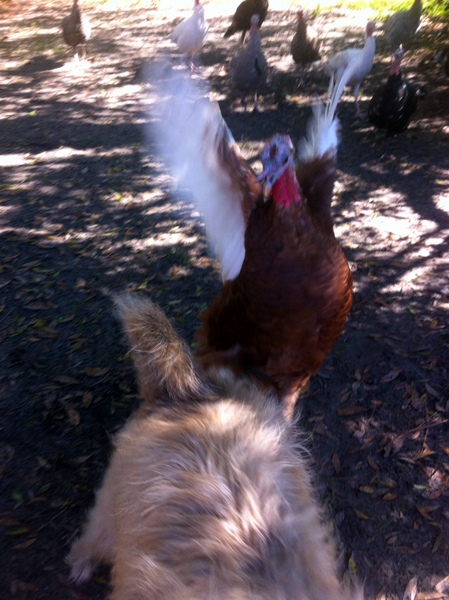 Funny, most of the time, the kicking is reserved for those of lesser status,

so Red Bird already knows she is superior to Rocky.

So, Red Bird thinks she is a dog-human or rather recognizes that Rocky is part of her social structure. As a teenager, she is driven to turn on Rocky to improve her status. Rock man thinks it is a game anytime one of the turkeys chases him.

When she fully matures, she will contest with the other turkey hens and ignore the dog. Luckily hens are not as aggressive as Toms, however some of the emails I received, are pretty explicit about hens being very mean to goats or chickens.

So, what can you do about the aggressive turkey?

Well, sort of depends upon the bird..... 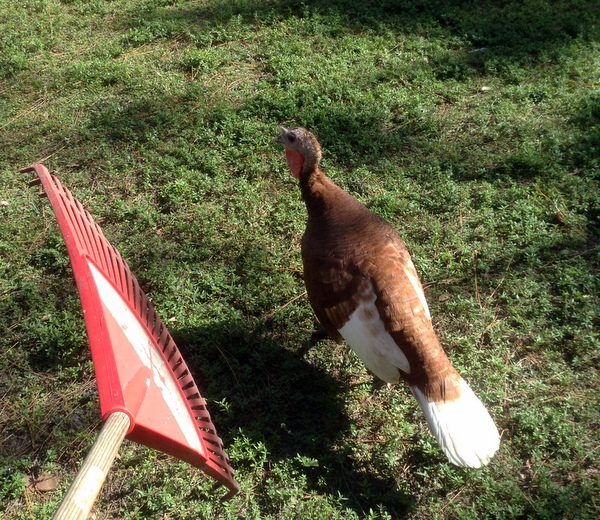 Essentially you have to think like a turkey and realize what turkeys do-they bluster and they fight until one is alpha. In the photo, I'm shying Red Bird away from Rocky. Establishing that I'm alpha and she has to correct her actions.

Easy to type. Perhaps not so easy in practice. 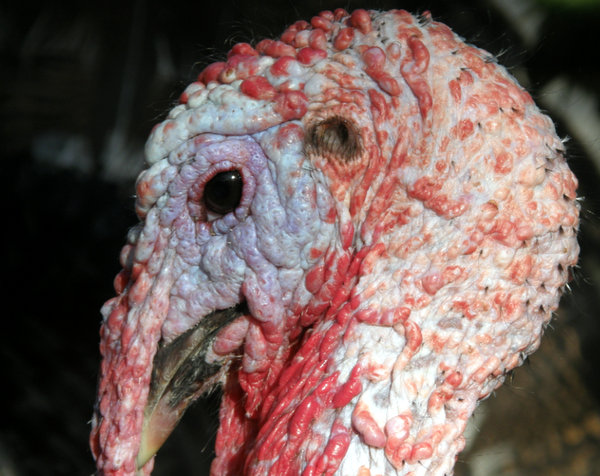 With a mean tom that I hand raised, sometimes I would have to chase him around (like other turkeys do) and let him know I was alpha.

Would also catch him and pin him to the ground for a bit. Wow turkeys do not like that. That was always good for a day or two.

Still I could never trust him around anyone---just cautious.

Even though he knew I was king of the flock.

My response (I added bold for this web page)

Most questions to sent me, similar to yours- happens in spring when the hormones are raging and both Toms and hens can be aggressive.

However, spring has past so your problem is slightly different.

However the goat is not giving off signals that would tell your hen that she is alpha over the goat and so continues to peck/ act aggressive.

May not be able to fix this problem. In the turkey world, there would be a fight and that would settle things.

I have a tom that I raised by hand and he imprinted on people and so he had no fear and will challenge my wife and I every day. Luckily, it is verbal only. However I have a habit with him, that when I walk by and he growls at me I kick him. Not to hurt him but to let him know I am the alpha.

I hate to say these words: but you may have to take a switch to your hen when she picks on your goat. Not hurt her, but you make her get the idea.

I actually don't believe that will work, but that is all I can offer.

However, when people ask me the same question and it is bird verse people ---I do say and do believe, you have to show the bird who is Alpha.

In your case, it would be you as the stand in Alpha for the goat.

FYI, I do not think she is jealous, but I would have to observe all three of  you to make that call

But all of this is just simple opinion and may be 100% off!

How about that last sentence---the most important sentence!