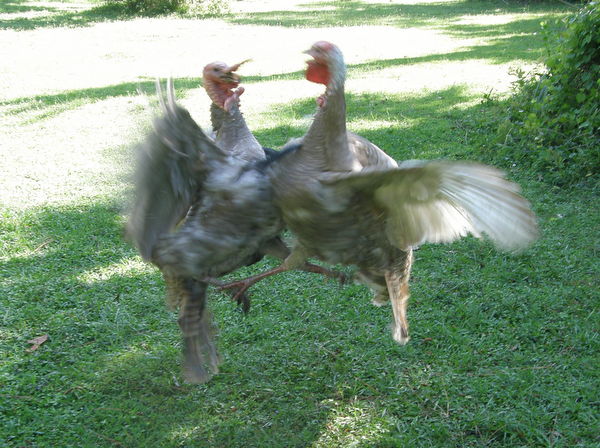 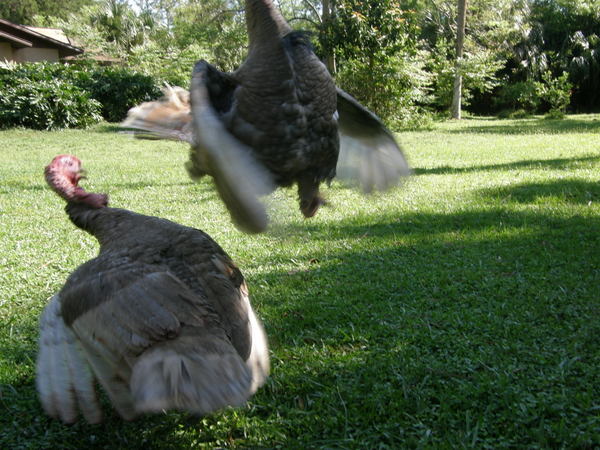 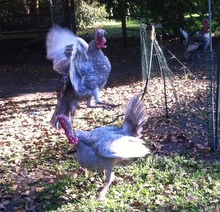 On a few of the other pages I briefly delved into turkey fighting and aggression but ran out of space. This page was created this to provide the additional information. 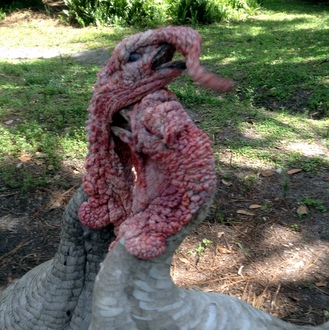 I decided to expound upon turkey aggression because I still get phone calls and emails from folks asking me “What to do about their Tom turkeys fighting each other?”

Our modern culture has encapsulated most of us from the realities of nature. The fight for Alpha status, -whatever the animal, be it lion, stallion, walrus, buck, wolf, silverback or turkey is a brutal winner take all contest.

Consequently people are shocked at the violence of turkey combat. I always explain, let them fight no matter how bad it looks; eventually there will be a winner and a return to normal behavior. (actually that was written incorrectly) fighting is part of the normal male behavior) & eventually a measure of peace will return. 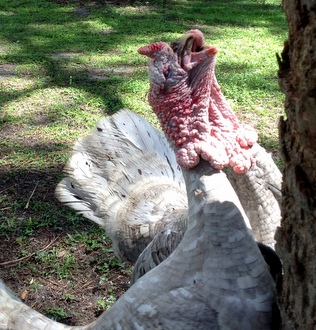 The challenge begins with two males twittering at each other in a turkey version of snarling. Their very posture aggressive: red faced, head lowered, wings flexed; the snarling transforms to “wing punching”. The toms strike at each other with the forward edge of their powerful wings.

(At first this might sound odd but only until someone attempts to grab an adult tom and experience firsthand the muscles in turkey wings- powerful enough to lift a twenty pound turkey into flight.) 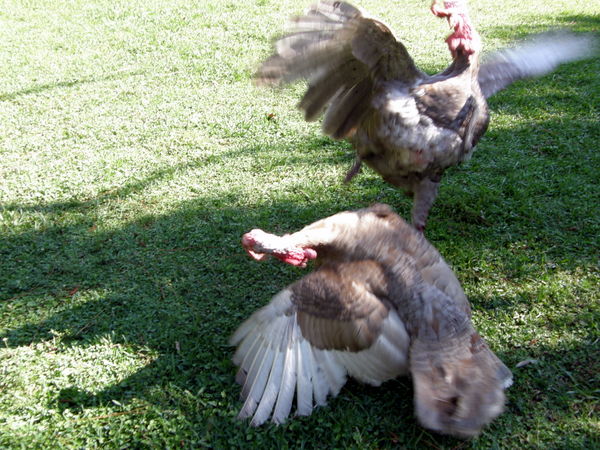 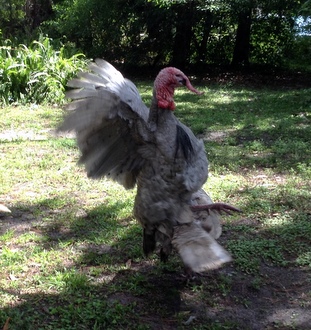 Along with the wing punches come wing flailing and kicking....But 'almost' never the use of spurs. (well I have seen the spurs used twice in hundreds of fights. My gut feeling is the ancestors of the wild turkeys that did use spurs were injured more often and so were less likely to produce offspring)

Or perhaps the wing punch is enough to send the teenagers moving back into the palmettos. 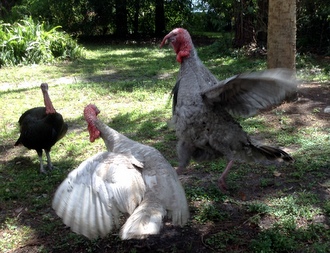 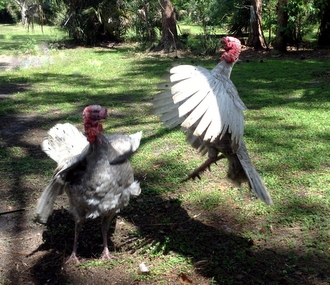 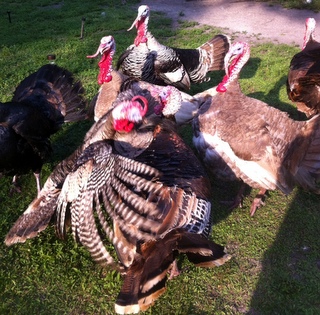 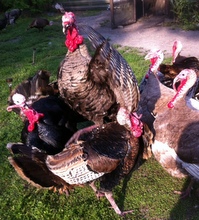 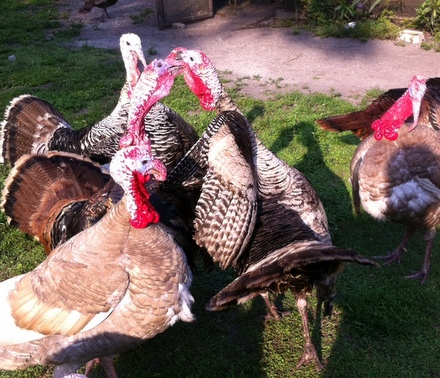 Wing punching graduates to “grappling”, (think two Sumo wrestlers) only the male turkeys use their beaks to grab their opponents by the caruncles or any fleshy part of the face and begin shoving & chest pushing while twisting their opponents head.

This turkey grappling can go on for days with the exhausted birds only ceasing the fight at sundown and they move into a tree for the night, the battle resumes at dawn and lasts until one of the combatants finally gives up. 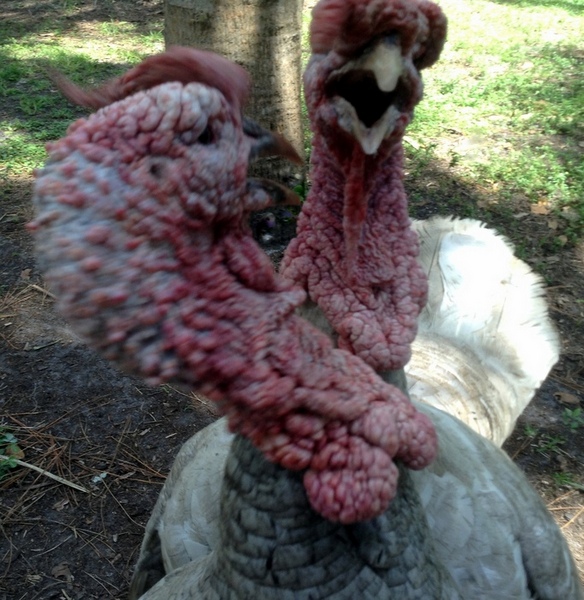 Reminds me of the Jurassic era 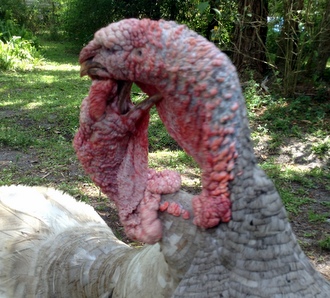 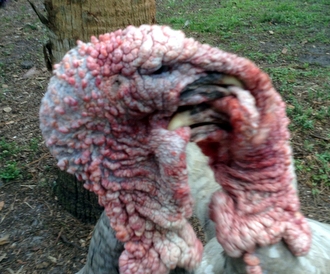 Ouch! All's fair in war, when the winner gets the ladies! 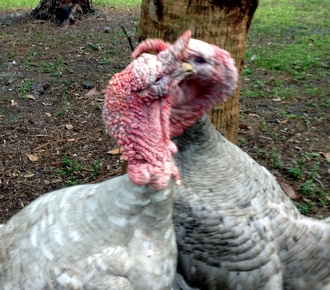 In the video the lighter of the two slowly starts to give and finally stumbles away. 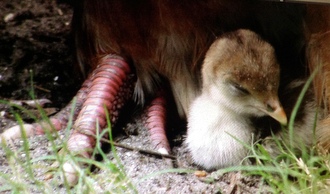 Okay, I got the "Eye Candy" out of the way and on to fighting and aggression.

A recent internet search on a well-known a poultry website listed five reasons why turkeys DID NOT make good pets. I read through the reasons and reflected: “um, yes, no, maybe, maybe and maybe.”

Somewhere near the top of this unnamed list was “aggression by the Toms”. My thoughts were “maybe……”

On the internet there are countless videos of wild and heritage turkeys attacking turkeys, dogs, cars, and people. Personally from my experience, those particular turkeys are the “one percent problem birds” or I have seen on occasion they are simply “Teenagers” that quickly grow out of the angry phase.

Now I have to be a realist and assume I have been lucky by raising male turkeys that are more friendly than angry. But after studying turkey behavior for 13 year—in my opinion, those sensations could just be crazy and in the old days were culled out.

I have heard of more problem males from those who are caged permanently in a small pen. (Consequently their environment has made them slightly insane. (Think of people in prison).

Types of Aggression can be handily split into four problem areas:

“Male on Male” & the fight for Alpha Status

“Male on Male” & the fight for Alpha Status. Like Roosters, there will be fighting if you have two males.

Perhaps about once a year, just before breeding season, or when a young male matures, the birds may fight for the alpha status “King of the Flock”. This fighting can last as long as 4 days and can be bruising and bloody. The fighting will begin first by striking each other with their wings (wow) and finally by grasping each other by the neck or face, pushing and shoving until one bird finally gives in. It is best to let them fight it out and get the trouble over with.

“Flock aggression” to new bids and predator threats.  Both male and female will act aggressively to new turkeys introduced to the flock. The behavior is related to flock status and adjusting new birds to the flock to a flock can be difficult for a couple of days. However the flock will always adjust to the newcomers.

The young turkeys, both males and hens will also defend their territory from wild birds, in our yard they chase off Herons Ibis, Fulvous Ducks, Buzzards, Doves and song birds of all types. Also, daylight permitting this same behavior will cause the “the flock” to chase off raccoons, cats and small dogs and alarm at strange people. (Sort of like: “It takes a Village”)

“Teenagers”  What can I say? It seems like teenagers, be they people or turkeys can/will cause problems. The only problem we have ever had between our turkeys and chickens happened about eight years ago when one during ‘snack time’ one of the teenage turkeys basically stomped one of our bantam hens. A one-time attack and to this day the old hen still limps.

“Toms and humans” while very rare, occasionally a male turkey may defend his harem against people. This will come in the form of attacking with their wings or kicking with their feet. I identify these as the problematic 1% of turkeys. From what I can tell, many of these birds have spent their life caged- this created this aggressive behavior or they are males that have imprinted on humans and therefore are confused and have reduced fear of people. But of course the wild turkeys attacking cars have never been penned. So….?

This 1% of turkeys could simply be “crazy”. I can use the example of two of our Toms that both imprinted on people as newly hatched poults. One turned out to be calm, affectionate and loves to be picked up. However the other bird is goofy, mildly aggressive towards us (similar to a male goose)

Why the difference? I don’t know.

The aggressive turkey in the example above is the only turkey we have ever raised that acts aggressive in the manner of a rooster or male goose.  As mentioned this particular male, we actually raised by hand and even as a poult, the bird was rather “flighty” and easily panicked. But the bird imprinted on us; that is “we are his parents” and when he matured he began to “try us”, that is attempt to improve his flock status over us in addition to moving up in the actual male hierarchy.

Final thoughts, we keep 15  (now 13 after the recent cat attacks) pet Tom Turkeys. Their relationship to each other and flock status is fluid and dynamic, entertaining, sometimes bloody. The one Tom turkey shows shows aggression towards people, mostly in the form of growling at us.  He could just be nuts. We named him “T-Rex” (often we call him other things) but generally speaking, once a day I have to smack him with the poop scoop to let him know I’m the alpha. UPDATE, he has reached the age of six and shows no aggressive behavior. Mellowed with maturity? 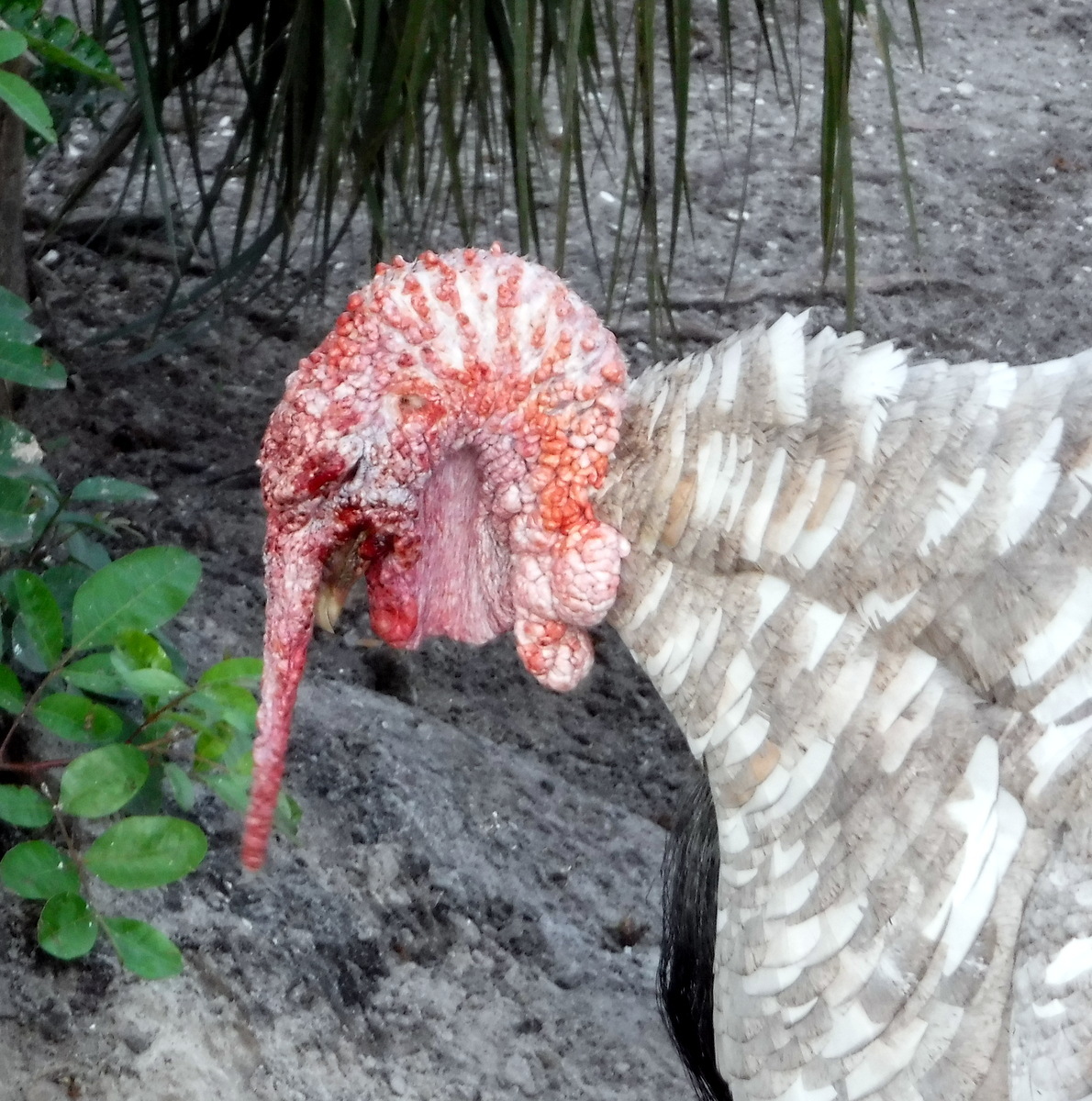 "I may have lost the fight, but I will be back!"

Update, recently I have had a surge in email questions about why their beloved pet turkeys suddenly began attacking a cat, dog or goat- often an animal the turkey had grown up with.

My gut feeling is the turkey is a flock animal, and they are always looking to improve it's flock status. (in the wild, higher flock status equals greater reproduction rights) At some point the domestic/pet turkey has accepted the goat or dog as a flock companion and the bird has to show it's dominance over the other animal.

Of course this does not always happen, for example our toms do not recognize ducks or roosters as a threat to their flock status.

My advice on the emails was rather crude, -wait for the bird to get over the aggression and use a stick or broom to change the behavior. Spare the rod, spoil the bird or something like that. In other words that is all I have and  hope it works...... In the turkey flock, that is what happens and it is sometimes ugly. 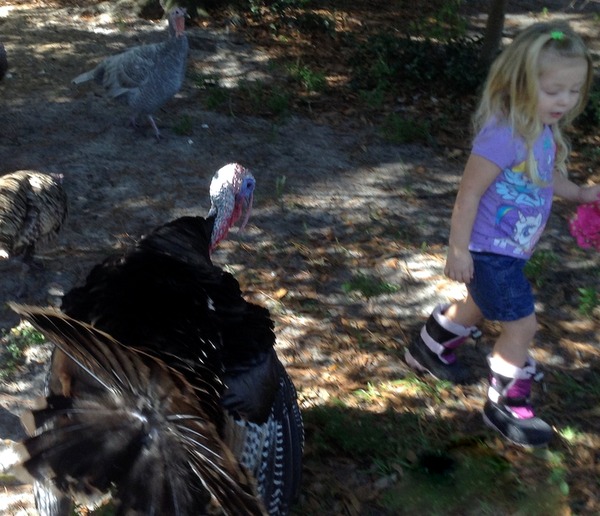 Had to use this picture again. It shows the classic aggressive posture. Head arched down wings out and tail splayed.  He did not take this any further, but I had to smack the tom. There is usually some verbal chattering that goes with this--

As mentioned when this tom turned 6  years old he was over the aggression type behavior.