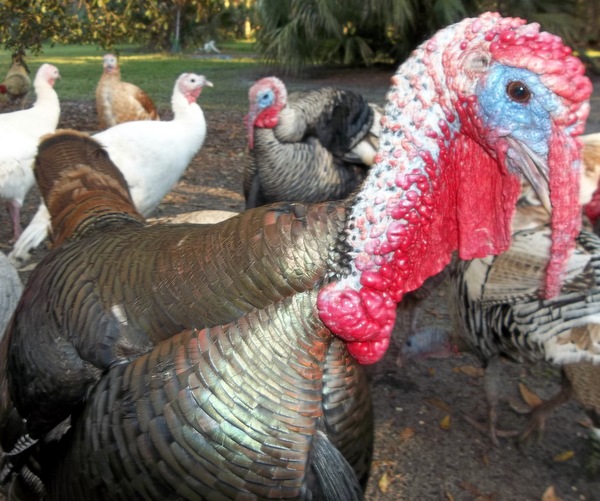 Origin of the pet heritage turkey-Where did they come from? 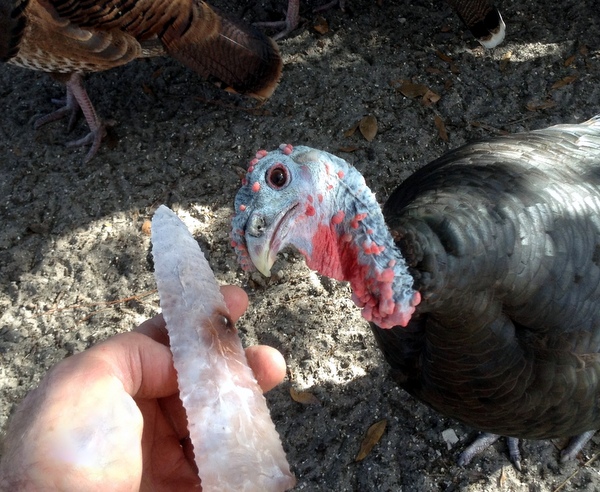 DNA analysis supports the historical accounts that the Mexican domestic turkey (Meleagris gallopavo gallopavo) is the ancestor to most modern domestic Heritage and broad-breasted turkeys.

How do we know the Mexican turkey is the ancestor?  After all animal domestication--be it turkey, lama or wolf-dog was a diverse often sloppy process of selective breeding and re-crossing of wild stock with domesticated stock.

Tracing the history of domestication of the wild turkey (Meleagris gallopavos) is all the more complex due to the easy flow of genes of wild birds to domestic birds often by the simple collection of wild turkey eggs. (Watch the excellent documentary “My life as a turkey” for an example of domestication through the process of “Imprinting”. 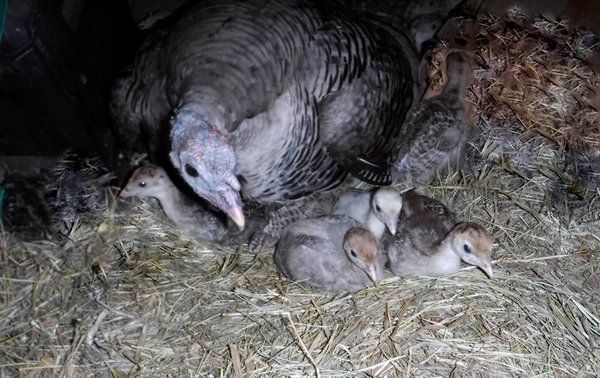 Yet fortunately for “Turkey addicts” like me, ever new archaeological evidence along with comparisons of ancient & modern DNA is illuminating an amazing story of human and turkey connections and pushing the time frame of domestication ever further back. Turkeys discovered in Mayan ruins

The turkey-human connections vary from the expected hunting of wild birds in their historic ranges (Wild turkey remains have been found in the ash pits of ice age Paleo-Indians) to the millennia long turkey domestication in the American southwest & over 2000 years in Mexico.

DNA analysis conclusively demonstrates The South Mexican domestic turkey (Meleagris gallopavo gallopavo) is the primary ancestor of most modern pet and factory turkeys; with only varying degrees of other sup-species of wild turkeys mixed in. Turkey DNA in Mexico and the American Southwest 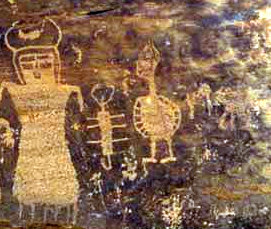 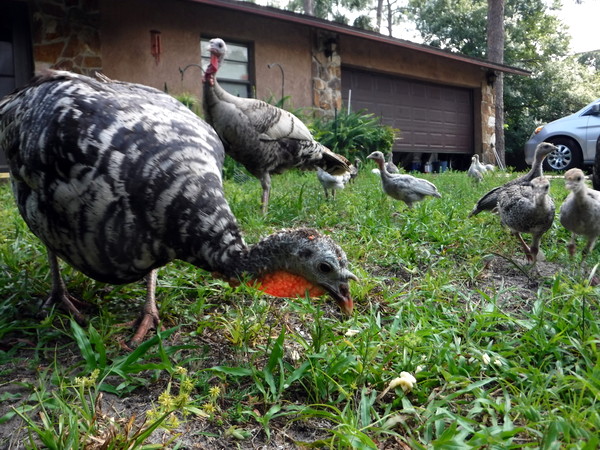 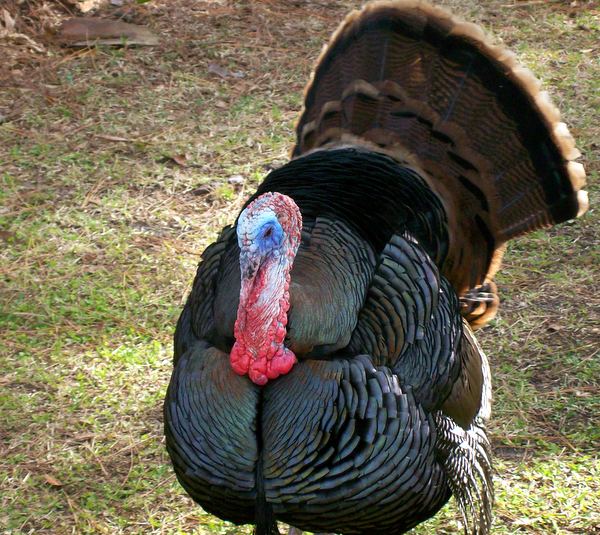 At some point during the last 11 ice ages, the ancestor of Meleagris gallopavo strutted across the Bering land bridge into North America--One might even stretch the story to claim turkeys were the “First Americans”

Seven sub-species of Turkeys survive today and an eighth subspecies (The California Turkey (Meleagris Californica) went extinct as little as 11,000 years ago.

Geographic range of the wild turkey

The Eastern wild turkey habitat is most of the eastern United States, ranging from central Florida to Lower Canada and westward to the Midwest.

The Florida Osceola wild turkey has adapted to the prairies, oak hammocks and piney woods of central and south Florida. The Osceola is smaller and darker than the Eastern wild turkey.  Wild Turkeys of Kennedy Space Center

The Rio Grande wild turkey has adapted to the river valleys of Kansas, Oklahoma, west Texas and northeastern Mexico and have been successfully transplanted to large areas of California.

The Merriam wild turkey has adapted to the ponderosa pine regions of the western United States and have been transplanted to Oregon and California.

The Gould’s wild turkey is well suited for the mountainous areas Arizona and New Mexico, Arizona and western Mexico.

The Ocellated wild turkey of the Yucatan, Guatemala and Belize is smaller than it’s northern cousins with almost peacock like ornamentation.

Last, but far from least is the Mexican turkey originating in central Mexico.-What I have read, is that this species no longer exists in the wild but nevertheless comprises 98% of all turkeys on the planet, thru domestication. 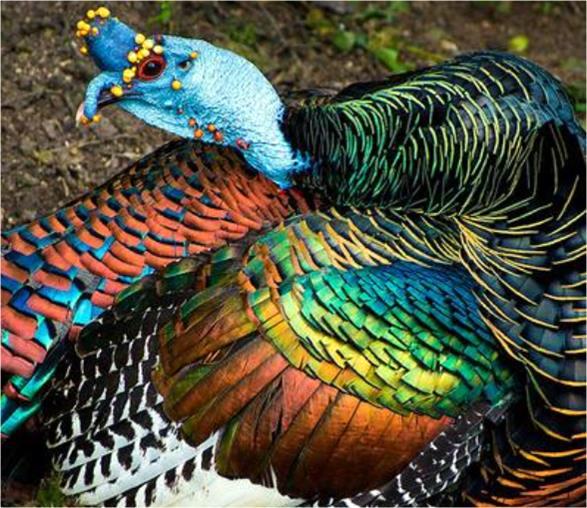 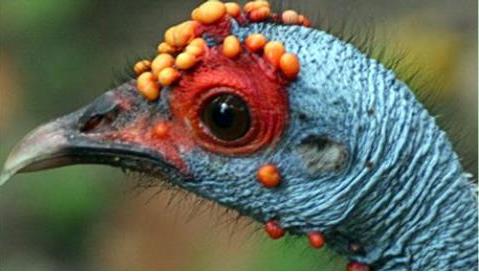 Scientific American description "The other turkey"

Ocellated Feathers photo by National Geographic. Well worth the look 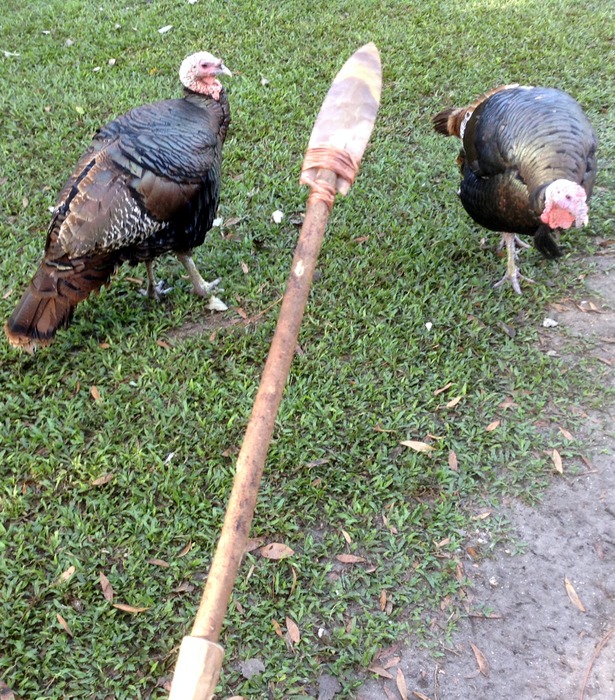 The California Turkey (Meleagris Californica) went extinct as little as 11,000 years ago.

Perhaps due to the arrival of a new predator in the Americas?

Odd fact: The California Turkey (Meleagris Californica) is the most common remains found in the La Brea Tar pits! 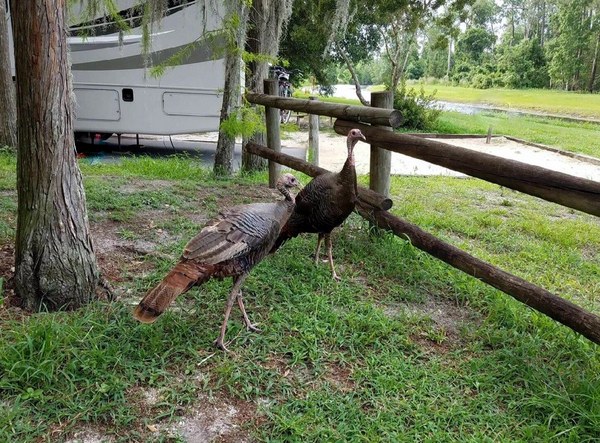 Visits by the wild cousins.

As we are situated between the Indian River and the St. Johns River there are occasional visits of wild Osceola turkeys -(Meleagris gallopavo Osceola). More often than not, the toms attempt to lead the hens to a life of danger in the St. Johns River oak hammocks & sometimes a hen will stick around, reminding us of the excellent but heartbreaking documentary “My life as a turkey” and demonstrating the adaptability of the wild turkey to the changing (urbanization) Florida habitat. 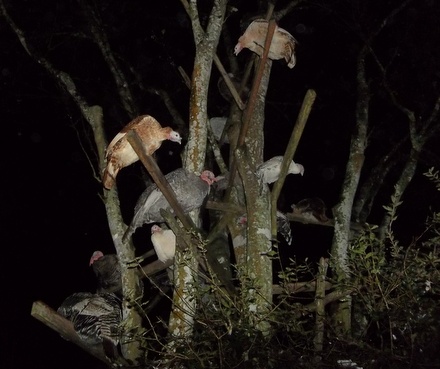 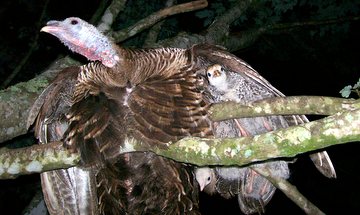 Wild and domesticated Turkeys in the southwest prior to the European conquest. A great artist concept of turkeys (in days gone by)

Have to apologize, I may have spread some misinformation

Somewhere in these various pages I think I wrote that turkeys were the largest native bird to North America. (and I really believed that)

I have been reading lately and one source states that turkeys are the second largest species.

The largest (or heaviest is the trumpeter swan (Cygnus buccinator), the wild turkey is next and three other birds have on occasion surpassed the weight of the wild turkey: