It is true people can be cruel but more often they are amazingly kind.

As a history addict, I have often read these words, "Animals domesticated people" & always thought those words were an interesting phrase, and coming from a horse raising family in Missouri I could appreciate the concept.

However it was not until the last few turkeys that were brought to us, that I fully comprehend the truth in those words.

Some of our heart warming birds were brought to us by people seeking to get a better home for their beloved turkeys.

I know...I know.... The term "Beloved Turkeys" sounds corny or dumb or hick-worthy, however turkeys have a way of bonding with people and vice versa-a bond that is of such strength that people are often shocked at their attachment!

The three most recent rescues: the owners drove an average of two and a half hours to bring the birds to a new home where they would not become a holiday feast.

And even though we love the holiday feast of turkey and gravy---Well we do not eat our pets. A hundred years ago? Of course that would be different.

Note: I may use the term rescue, however the birds were not a rescue in the common understanding of the word. The birds were "re-homed" to us out of love. 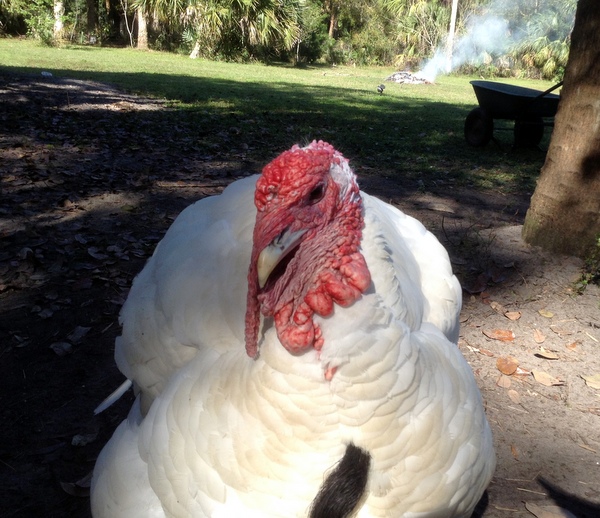 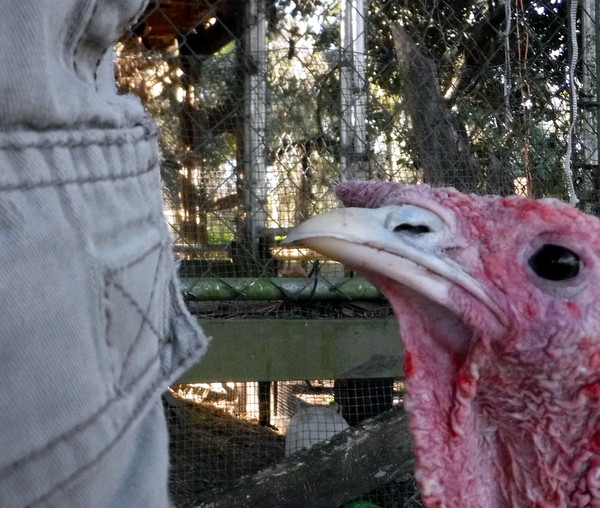 "Christmas Boy" is a white Holland turkey brought to us. A beautiful snow white Tom whose owner had to him give up.

We call him 'Christmas' And I often think if we did not have far too many turkeys already, I would not mind having an entire flock of White Hollands.

They can breed naturally and are quite striking with their pure white feathers.

Because Christmas imprinted on humans; wherever & whenever there are people to be found: Christmas is puffed up displaying his goods!

"Loretta Peepers" was brought to us from her owner in Sebring Florida.

Loretta is a sweet hen who also imprinted on humans. Loretta is the first Broad Breasted Bronze turkey we have had in years.

Of interest, Loretta is quite attracted to our eastern wild toms and yet she has not been able to successfully mate with any tom.

Even less than a year old the broad breasted turkey shape/body style prevents natural reproduction. I have not made up my mind on whether to give her a fertile egg this spring.  Previous attempts at Broad Breasted hens raising babies ended with the baby turkey being accidently smashed by the heavy mother. 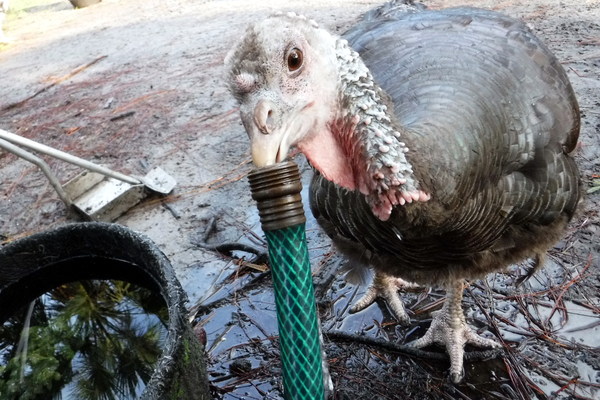 Loretta loves to drink from the hose! 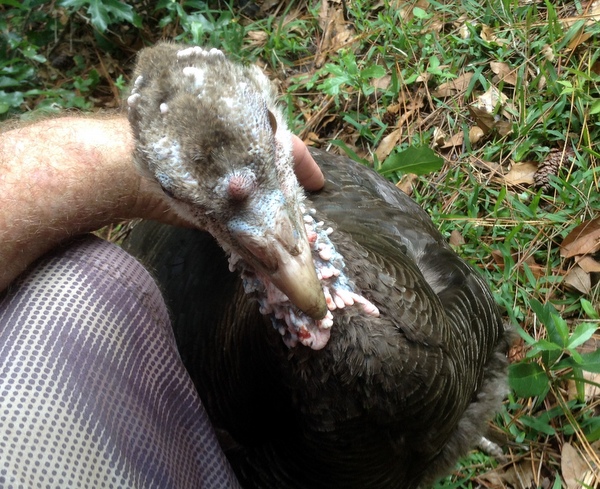 His mother was killed on a nest and the orphan Lucky was given to human parents to raise with their chicks. As Lucky grew, the chickens who were larger- began to attack Lucky and he was temporary brought inside the garage to get away from the chickens. That very night a raccoon broke into the coop and killed all the chickens. Lucky was indeed Lucky.

His personality is still developing  & after a quarantine period and flock introduction Lucky now roosts in a tree with the other teenage turkeys.

The Gang of Four

I went and picked up this group of four. The owner was quite upset. His favorite Road Island chicken had been killed by raccoons the night before and he wanted this four gone before the horde of raccoons returned and murdered all. 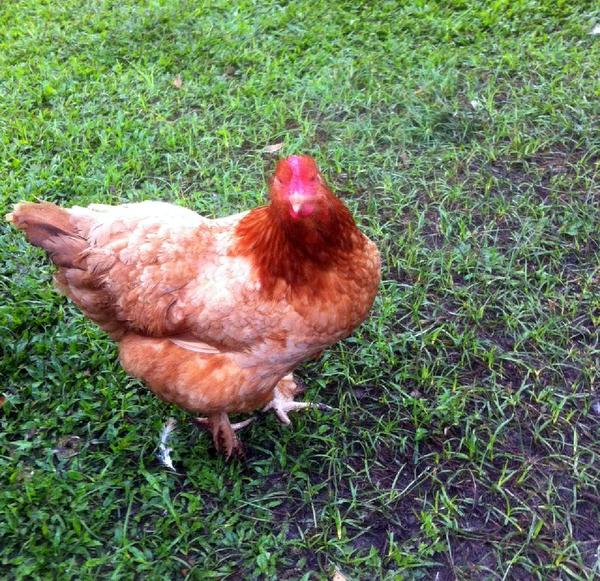 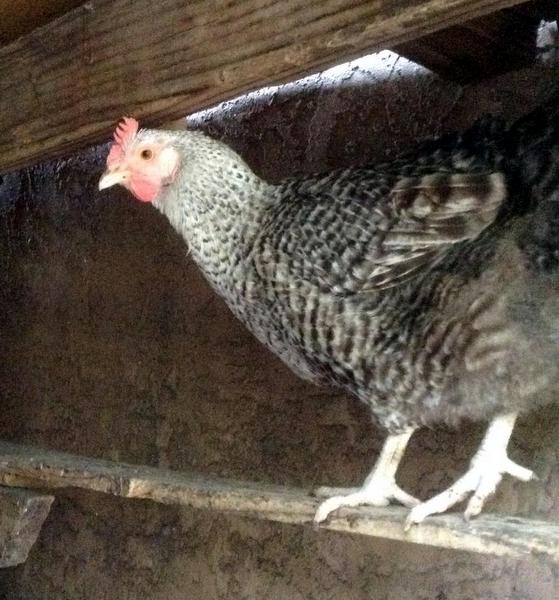 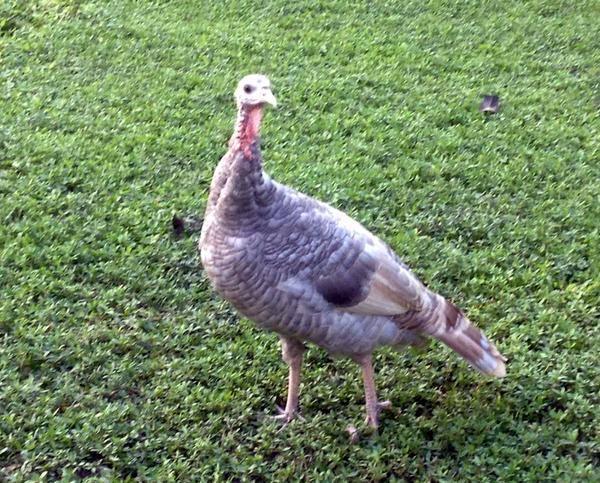 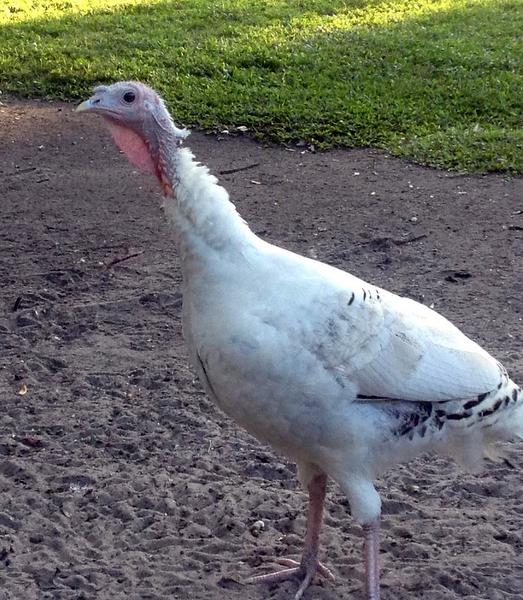