I was given a temporarily reprieve of the mandatory overtime at the space center.

I was actually watching the sunrise on the way to Kennedy Space Center.

Something I had not witnessed for almost two years.

We did have the warning that the mandatory 60 hour work week would be returning after the test rehearsal to roll the SLS rocket with the Orion/Artemis capsule out to the launch pad and then back to the VAB. 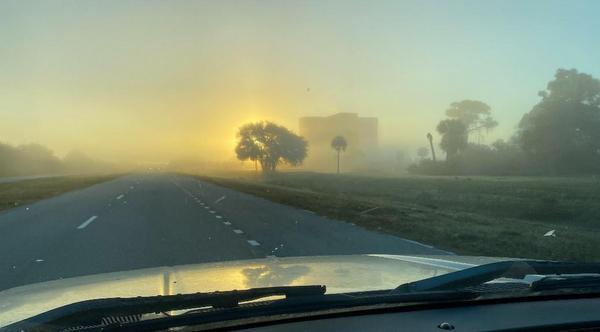 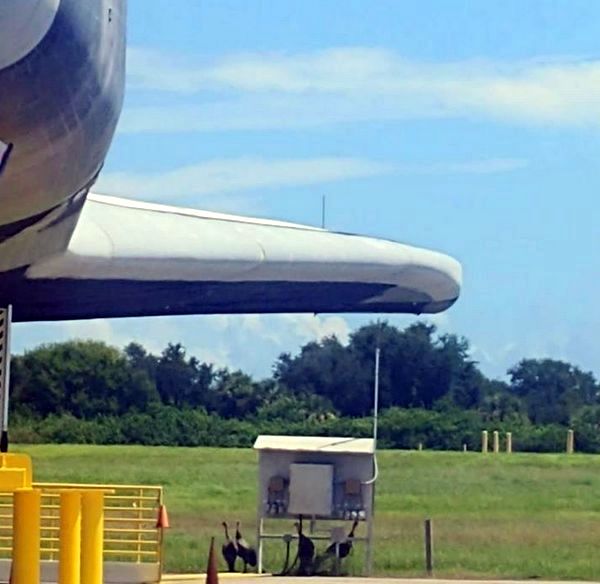 Wild turkeys under the shade of a Space Shuttle wing along the runway.

The turkey population has been steadily growing-despite the cats.

Just outside of the KSC property, as I was scrambling for my ID badge to get onto the space center I saw the "kill and pluck" feather pattern that I know too well from home:

-a bobcat or even a panther had killed one of the space center turkeys.

I do not believer there is a more concentrated gathering of bobcats in all of Florida than Kennedy Space Center, constructed in the middle of the Merritt Island Wildlife Refuge. Odds it was bobcat turkey murder scene.

On the way home, I passed through the south gate and had just gotten off of federal property when I saw the hawk dive from the trees and attempt to grab a snake or mouse.

Beautiful dive by the raptor; however, the departing space center traffic disrupted its killing strike from the trees.

I saw a tiny figure dart from one weed to another. A quail or Kildeer?

No, was that a turkey poult?

I pulled over onto the shoulder of State Road #3 to the honking annoyance of the space center workers leaving the base. They are never slow going to the bar or gym.

I had marked in my mind the tall weed where I saw the little bird scuttling to safety and made my way towards the location, all the while with the traffic accelerating now that they were out of the watchful radar guns of the space center security police.

I approached the location and waited for a break in traffic because I had to step onto the pavement to glance under the weed.

A poult was crouched under the plant. A baby turkey! I stepped away from the road and watched the traffic again. Perhaps a hundred yards away, I could see the feathers of a plucked turkey.

I was going to have to dive on the bird for any chance of rescuing this orphan.

I stepped back from the edge of the road and watched cars and some people not texted watched me. When I judged an adequate traffic break, I pounced.

Not my first poult grab, so I made sure that if the bird escaped my grasping fingers it would flee into the heavy grass and get entangled.

And so I stood up with a trembling little turkey.

I was just outside the federal property marker. If I had been on Kennedy Space Center land, I would not have dared to capture the bird. Even driving a wild turkey to the park rangers could have been a firing offense. 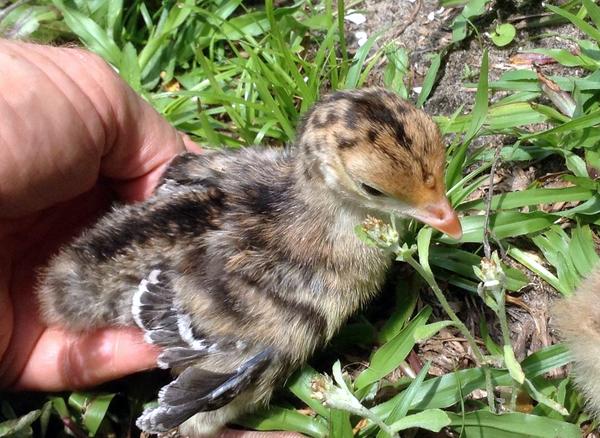 I gave the new turkey the name Artemis, in honor of the moon capsule.

(If the bird was a male, then the name would be Art)

Turkey babies demand or rather plaintively cry for attention, for warmth and companions. My brooder box with a mirror would help, sort of.

But I needed a real mother.

I had a turkey hen raising a single chicken. None of the turkey eggs had hatched. However, I often add a chicken egg or two to the turkey nest, with correct timing-so the chicks and poults hatched together.

I waited until complete darkness and slipped Artemis under the turkey hen who was keeping her chicken warm.

It was far past the time when the turkey hen will adopt any duck, chicken or emu without reservations. Waiting too long to give the hens a new baby failed more often than succeeded.

However I did not have any other options and I would rescue Artemis if the hen turned mean.

But at daylight, the turkey hen was suspicious but not attacking. A really good sign.

When Artemis began the 'lost turkey call' the turkey let the new baby in with the chicken. 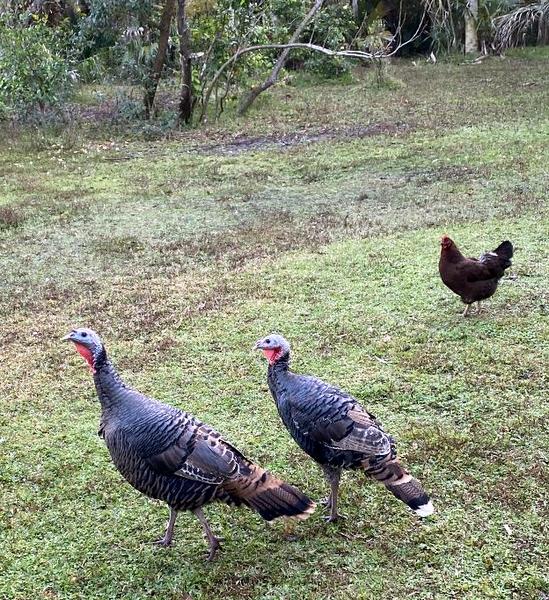 The family: Mother turkey hen, Artemis the turkey and Rocket the chicken

In order to celebrate the successful adoption of Artemis, I gave the chicken the name "Rocket."

Artemis and Rocket were inseparable, and the turkey hen like most hens was a caring and protective mother.

It gladdened my heart that the three birds were a family unit. 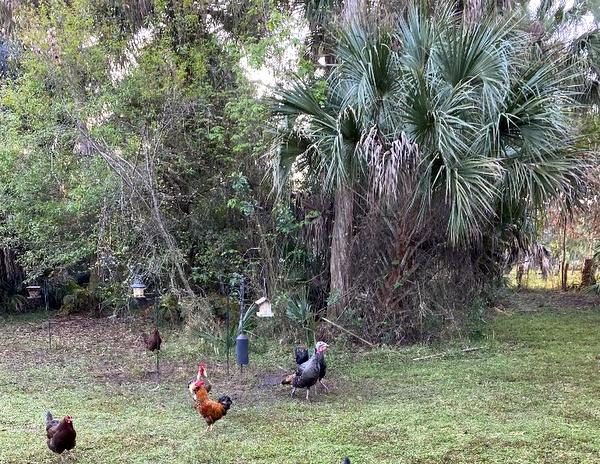 Mother turkey hen, Artemis the turkey and Rocket the chicken

Clandestine raid upon the bird feeders (painted buntings ran off)

The hen free ranged her two babies all day and then at dusk they would put themselves up in an inside pen with perches.

Like all heritage turkeys, the hen began to take her two babies on training flights into the tall oak tree.

I would walk outside to check on the birds and Rocket would be running around in terror because the mother and Artemis were far into the tree, but Rocket did not have the flight ability to reach the branch levels.

When the inevitable came, where the turkeys wanted to spend the night in the oak, I had to knock them birds down, at least until Rocket could reach the upper perch.

Took about thirty days, and now all three birds spend the night high up in the oak tree. 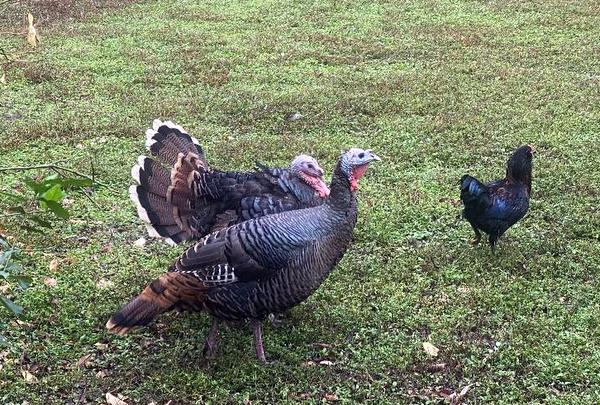 Artemis the male turkey showing off

As Rocket and Artemis matured into teens......distinctive signs began to appear. Both the chicken and turkey were showing signs that they were a rooster and Tom turkey.

Welcome to the forever home! 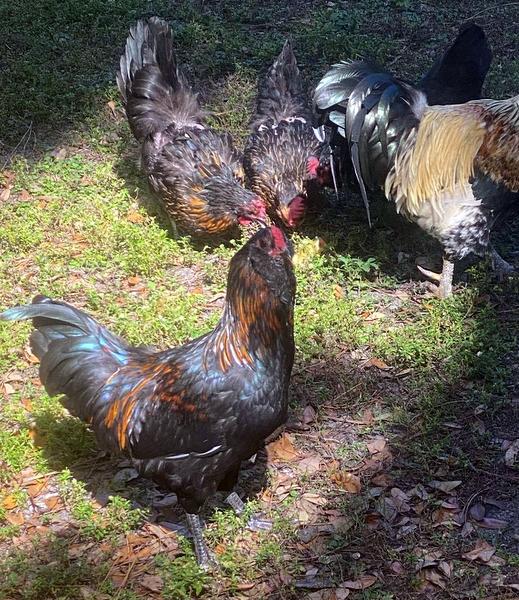 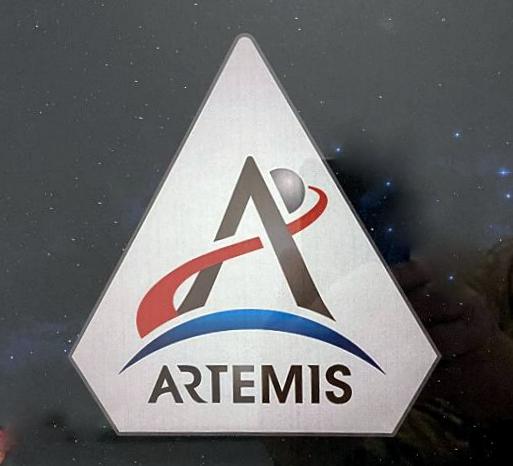