Hurricane Irma
Hunkering down with too many animals to evacuate.... 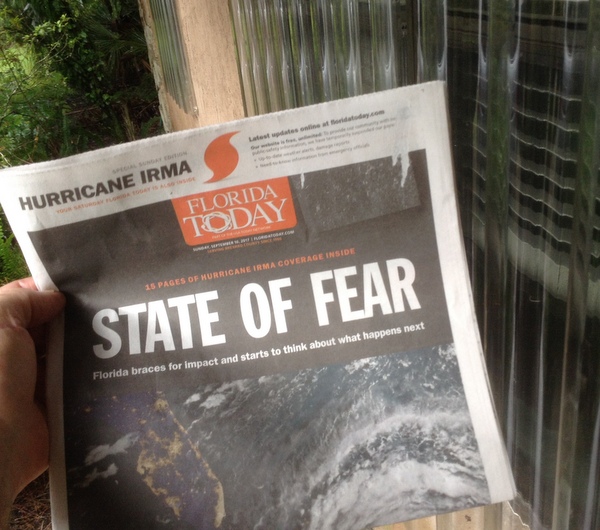 Starting the writing of this page before the storm arrived, with the fervent hope there will still be a roof come daylight of the morning of the storms arrival

(or just another storm season in Florida)

Too many Chickens and Turkeys, dogs and Cats, to evacuate with the other 8 million terrified folks trekking the clogged interstate and so we set our goal to safeguard the birds in our outside garage. Doubly challenging because we have so many geriatric turkey pets -most of them old toms that would get picked upon by the Alpha male turkeys- if penned together. 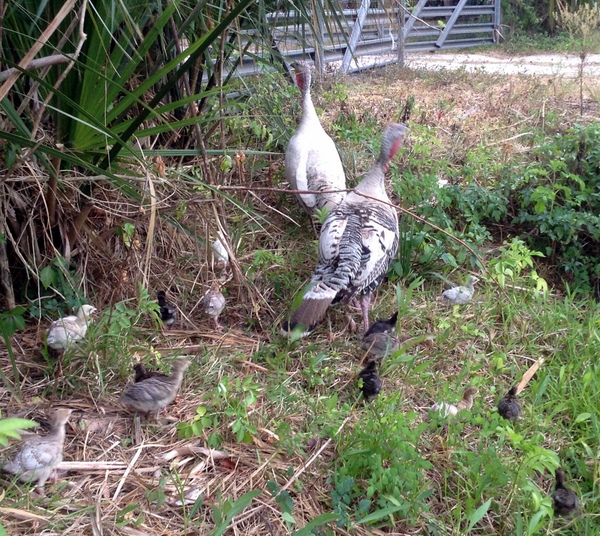 Allowed these two moms and their poults free range the day before Irma's arrival. Let them get some sun, grass and dust bathe before locking them up for two days as the storm raged.

Of course having turkey babies in September is utterly ridiculous. This is the third 2017 hatching for these two hens. Enough already!

Clean and organize the cages to secure the chickens and turkeys inside a block building. 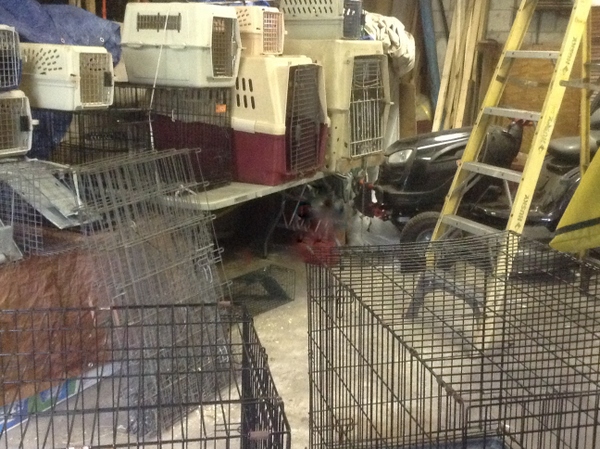 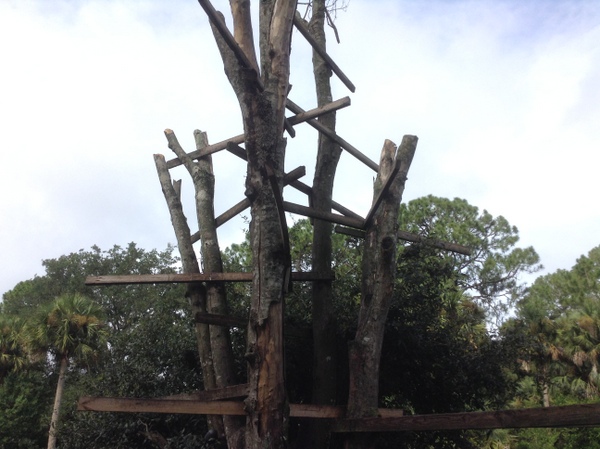 The maple tree was so majestic,-heartbreaking when it died

The tree worried me, perched to fall on the turkey pens.

And along comes Hurricane Irma, Category 5 storm, Strongest Atlantic Hurricane ever recorded- winds slamming the islands at 180 miles per hour.

Complete freak out by those who never prepare for hurricanes and more than worrisome for those of us that do prepare every year. 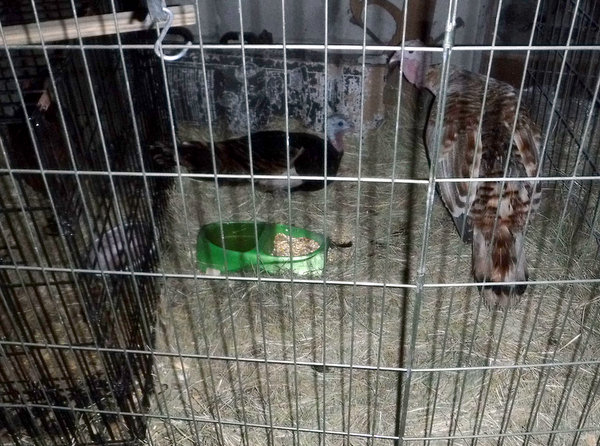 Butterball & Coal safe for the storm

After the cages were staged and secured, the babies locked up, we began to carry the invalid turkeys inside. Since the outer rain bands of Irma were already sweeping the state; nearly all the birds were happy to be placed in a thick hay bedding and began to preen. 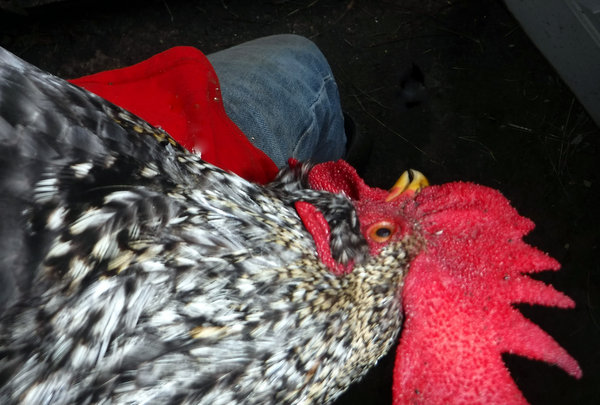 I think we counted 26 free range chickens that we had to catch and carry inside.

First we guided the old toms inside and slowly coaxed them to their own hay lined cubby holes & sealed them in.

We had learned the hard way that different flock status Toms could not be mixed. And so the older or weak turkeys had to be separated from the others.

Next we guided all the hens into the building (using two long bamboo sticks). And finally the alpha male Toms (6 of them)

As mentioned the birds were happy to get out the rain and we placed the final window protection, turned the lights out and made the inside very dark. 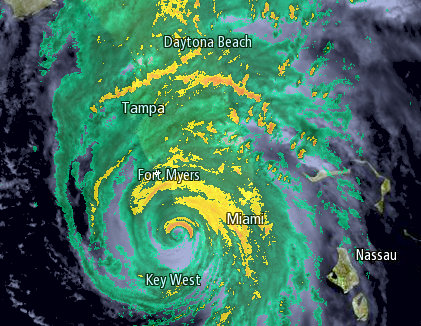 Somewhere under Hurricane Irma is Florida and us. Irma spun up dozens of Tornadoes coming ashore from the Atlantic 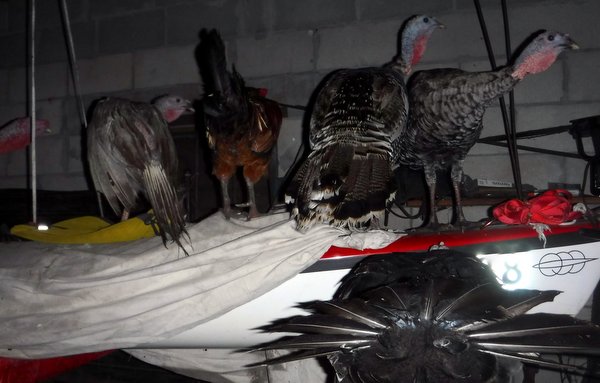 Some of the turkeys using my kayak as a perch during Irma. Not the ideal use of the fast boat, however it was an emergency. 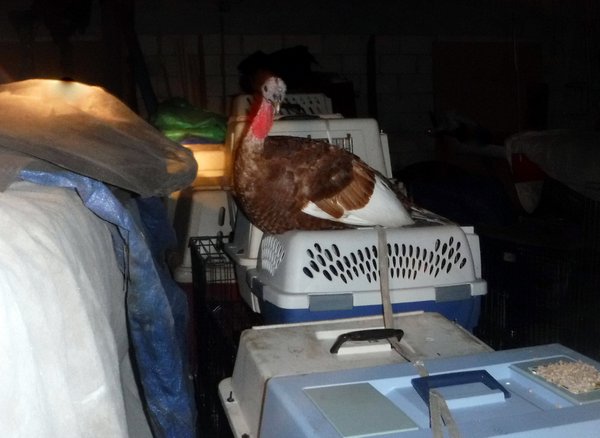 "Red bird" finding her spot on the quail and chicken cages. 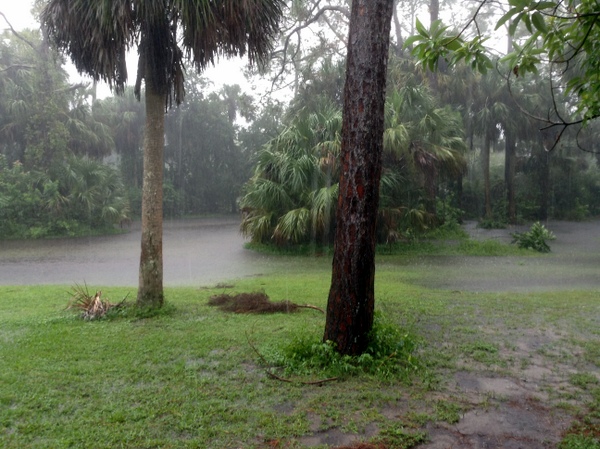 Next project was to relocate the turkey hens and eggs from nests across the street in the neighbors pasture.

I first fired up the incubator, anticipating the hens may no sit the eggs on their new nest. (And placed fake eggs on the nest where we would be moving the hens.

I waited until full dark and took a bucket, quickly but calmly I hopped, I pinned the hens wings down to her side and picked up the eggs. Rain was coming down  & I covered the eggs on the way back to across the street.

Carefully I placed the hen in the pet carrier with the fake eggs & placed the real eggs in the incubator.

Repeated the process with the second turkey.

The hens did not actually sit on the fake eggs until I placed a solar spotlight on the eggs and the hens were happy to settle upon the eggs.

When we lost electricity during a particularly strong gust, I moved the real eggs to under the two hens. 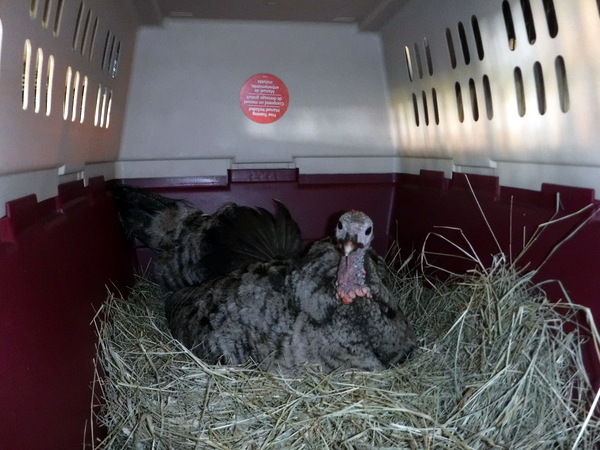 Re-located Hen setting upon her eggs during Hurricane Irma

Long night of wind and the next morning..... 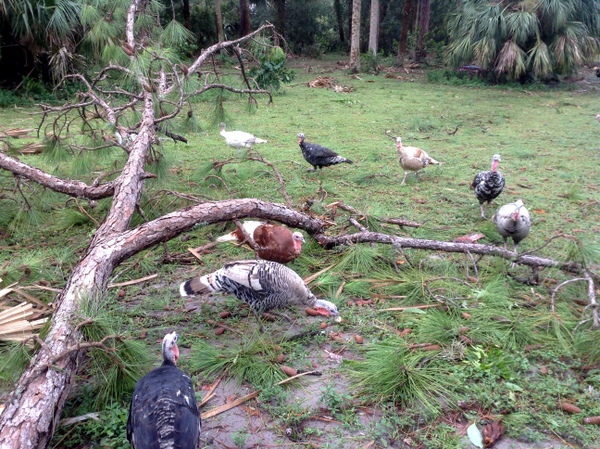 Turkeys inspecting the fallen branches when released from their storm shelter. 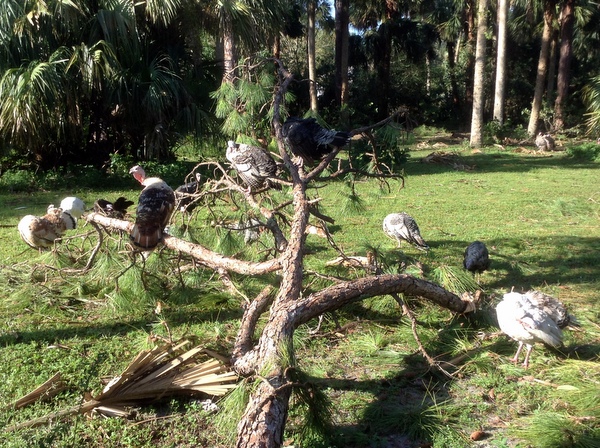 Afternoon, sun comes out and the birds enjoying their new sun spot perch 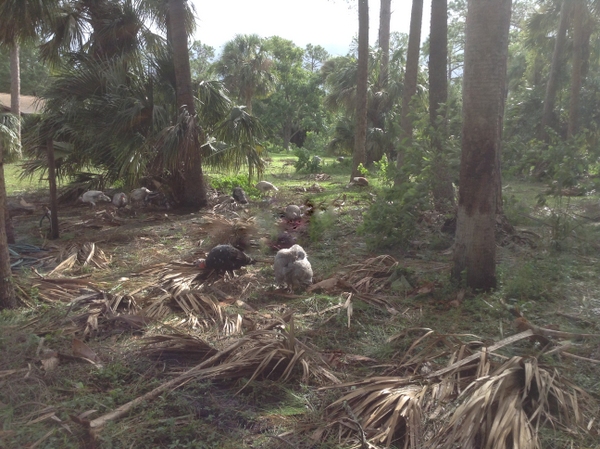 Figure there is a month worth of work just picking up palm fronds and pine needles, however no complaints. We had no structure damage.

Two more tropical depressions lined up in the Atlantic!.

Kennedy Space Center closed for a week because there was a water line break.

The Keys, not sure if Key West even exists anymore. 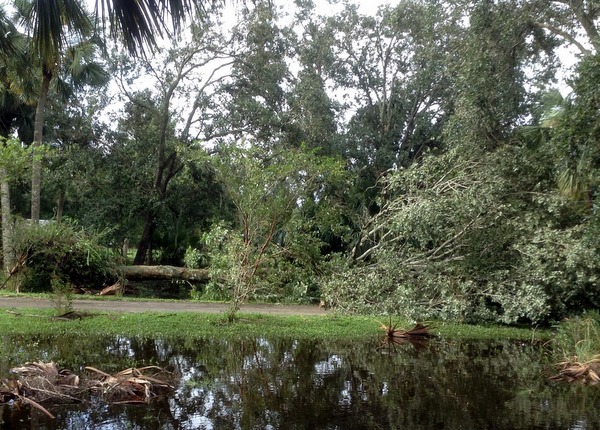 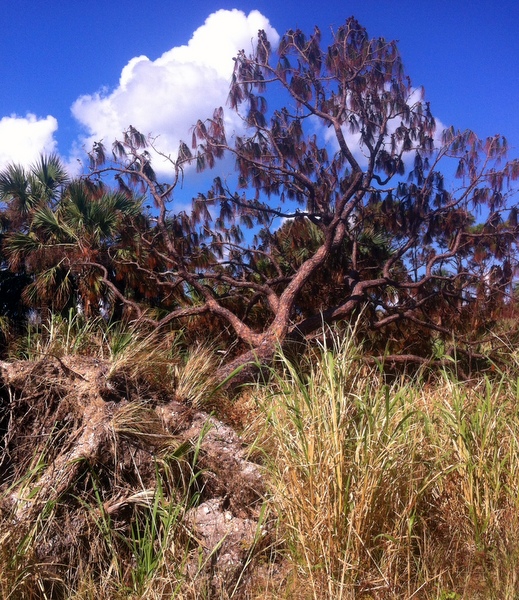 Simply Florida Living at it's finest. 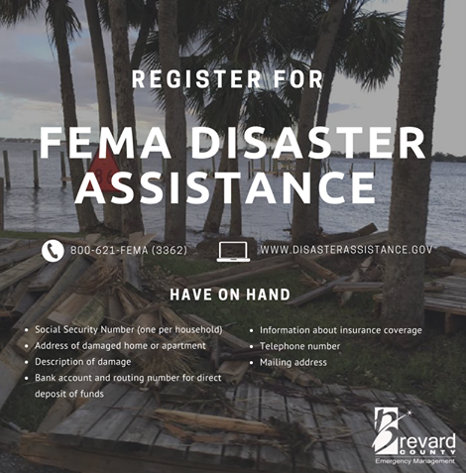 And everyone but the southeastern gulf states have forgotten that Hurricane Harvey came ashore in the late summer of 2017 and did significant damage, but Harvey was "old" news as soon as Irma spun up!

Some effects of Harvey on the Poultry Business.