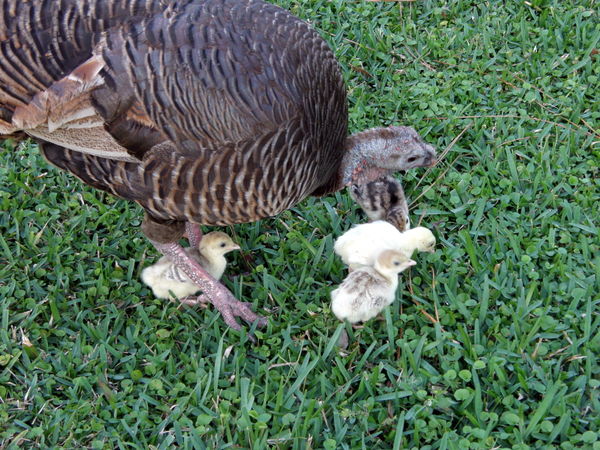 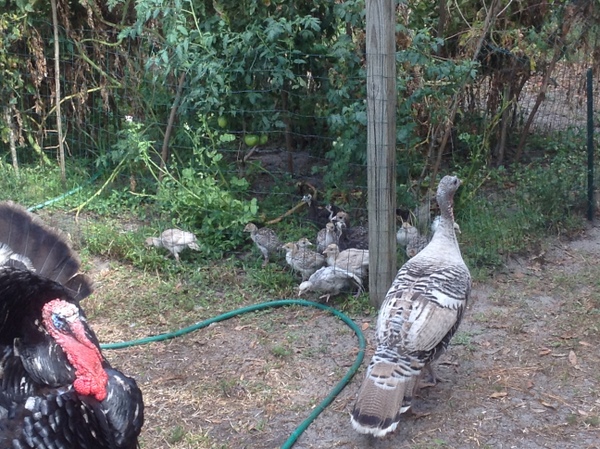 Poults in the garden. (I don't let the hens inside until the tomatoes are 3-4' tall)

Shared parental (or rather maternal) responsibilities

So I have been told: (meaning I have not yet actually observed this) If one closely examines the composition of various wild turkeys flocks, often you will find the same pattern repeating year after year. And I’m going to conjecture, century after century. 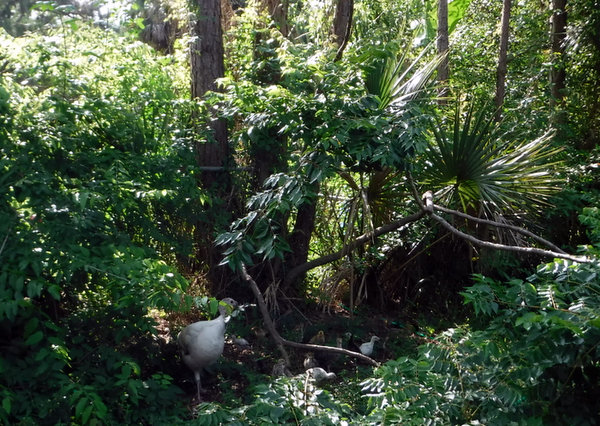 Unless there are stragglers (lost birds from other flocks) turkeys are normally grouped into four distinct flocks of birds:

Hens (of all ages)

And in fact, these four groupings are quite similar to how domestic turkeys gather. 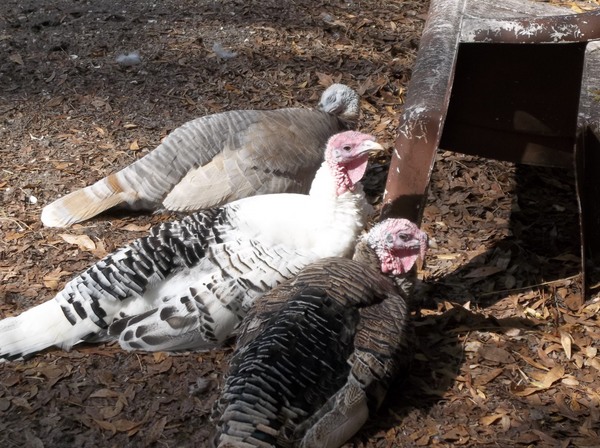 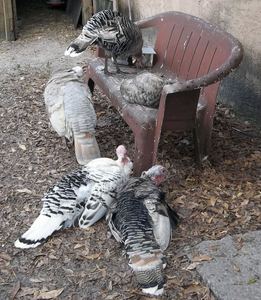 Natural pairing of the hens with poults.

Look around our yard or a state park (or along the Beachline Highway in Central Florida) or Kennedy Space Center and you might see several turkey hens supervising newly hatched poults.

Turkeys being the social animals that they are; it is only natural for the hens to come together to raise and defend the turkey poults in a shared manner. (Teamwork, the ultimate survival tool) 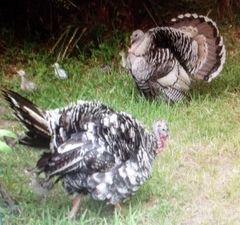 However normally this “come together moment” is not always an easy union to form.

The hens have to adjust from their 28 days of isolation to their normal flock affiliation. And this while attempting to protect their new babes from threats foreign and domestic.

There can be fights, actually there will be fighting. Not like the brutal winner takes all battles of the Alpha males, but brief puffing up and limited hen fights of a few kicks as the social order is reset to that of the “pre-nesting time” or at least close as possible considering the may have been fatalities during the nesting process.

The biggest worry during these brief encounters is a new poult getting stomped. 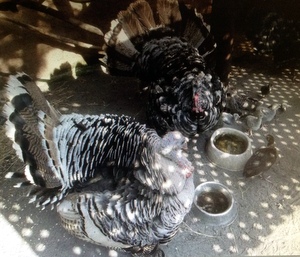 Sill puffed up from the other hen!

Initially the hens may try to avoid each other in an effort to protect their brood; however those pesky children (baby turkeys) get involved-- to mingle, fight, hunt and show off doing comical “mini puffed up displays”.

One remarkable aspect of this spectacle of mother and brood is no matter the shuffle and intermingling of babies, the poults always can distinguish and choose the clucking of their mother from other hens and the hens themselves can recognize the sound of one of her babes giving the distress call.

Never the less, as long as the poults are close in size, the hens soon bond together as mutual guardians and nurturers; staying together until the poults are nearly full grown or the hen mates again and begins another nest. 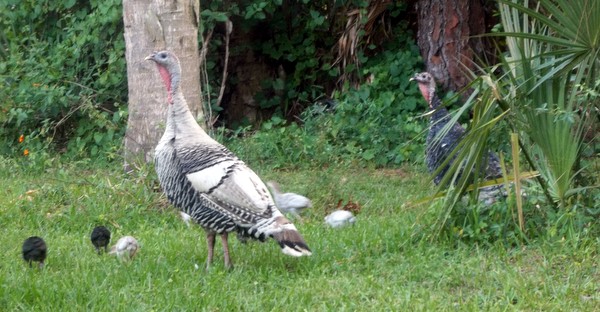 By the way, from what I understand, in the wild: When the turkey poults become large teenagers; the turkey mothers banish the noisy rambunctious “Teenage boys” (known as Jakes) from their mini flock but keep the girls with them as the basis of a new flock unit.

In the wild, the teen age boys then band together as flocks of young bachelors. Sort of funny when you think about it; teenagers are loud and fight too often. So the trouble makers are ejected. Teenagers--whether they are human or turkeys evidently can be somewhat exasperating.

To be fair, in a wilderness full of predators, getting rid of the noise makers is sensible survival strategy. 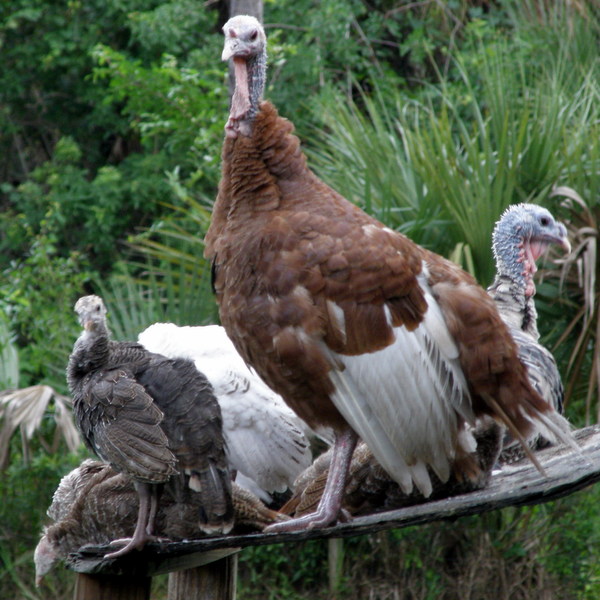 Well since the hens with poults will form a flock unit sooner or later; --sometimes (due to lack of space) we force the issue of hen bonding and sharing of nurturing duties.

Let’s say a multi-day storm front is approaching (as mentioned elsewhere: rain is a killer of baby turkeys) and consequently we have to put the “newest” baby turkeys inside until the storm passes. However what if our inside dry pens are occupied?


What works for us: One hen is in a pen with poults of certain size. (Preferably we have given the mother and babes time to form an unbreakable bond-3 to 5 days)

Into the pen we place a piece of wire fence to divide the pen into two sections. Wire is used so the hens will be able to watch each other. The bottom of the fence is wide enough so the poults can walk to either side of the fence.

For this “pairing” two water containers and two food containers are placed on either side of the fence.


Usher in the second hen with poults as close as possible to size of the other baby turkeys. The poults will immediately mix while the two hens will puff up. “Turkey body language to face a threat.”

If there was no fence to separate the girls, the more Alpha (dominant) of the turkey hens would begin a kick boxing fight. However by making the girls look at each other but not allowing them to fight; the two mothers have the chance to size each other up and determine the threat level to their babies.

Almost always, in less than one day, the fence can be removed and the two hens settle down to work together. On occasion this “bonding” may take two days.

So what could go wrong?

The problem with the pairing comes from the exact situation we had this spring. Mixing birds of widely different social levels (flock status).

Our first hatching this spring came from a hen who is only 7 months old---Basically at the bottom of the social hierarchy. Our second hen to hatch eggs was an old girl who is near the top of the Alpha status, if not the actual female Alpha.

All was good until we removed the fence divider and bam. Attack! The old hen would not stop chasing the younger hen.

When they were free ranging-grazing in the yard, there were no problems. However place the two groups in a small pen and......Well it was a big mess of squawking hens and screeching baby turkeys.

I felt sorry for the young hen and re-installed the section of fence to divide the inside pen, giving her a reprieve from the meaner bird.

At daylight, they were turned loose to free to range for the day.

This spring I kept an eye on the two hens dust bathing and free ranging and watching the third hen to hatch babes. On Saturday when I was not pressed for time I encouraged a "meet and greet" of the three hens with poults.

There was the normal puffing, twittering and a couple of kicks. After only 20 minutes of chaperoning turkey the mothers, the three hens settled down as buddies for the day. I split them up again at sundown and herded them to the inside pens as the satellite showed rain on the way. 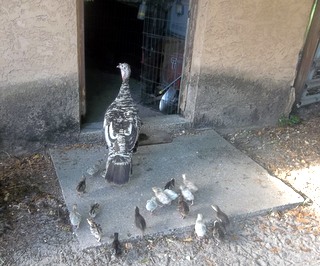 Putting her babes up for the night

One weekend we had four hens hatch out babies. The result being I had to place all four hens and new hatched poults into two inside pens. The pens were divided into four mini pens and when I arrived home from work, I removed the barriers between pens. One pair settled down immediately together.

The other two circled each other puffed up like a tom –but no kicking. At length both hens settled down at opposite ends of the pen. 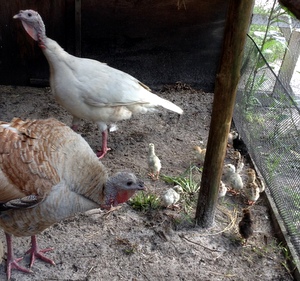 First time in the outside pen.

Hens are paired up. 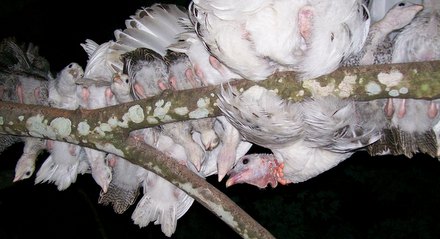 When old enough, first night in the tree!