This was written as an addendum to the Aggressive Turkey page

Turkeys-those gobbling feathered omnivores that thrive in the modern world-be it forest or farm. However their hardwired social behaviors-successful survival tenacity in the predator rich wild, often cause problems at the urban homestead and congested factory farms. 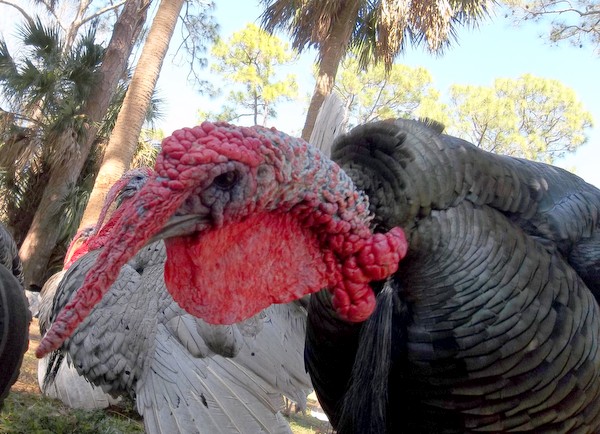 The central proposition of poultry evolutionary psychology is that the noble turkey retains the personality traits of their ancestral feathered dinosaur forbearers as well as bearing the effects of uncounted millennia of molding and culling under the unforgiving pressure of natural selection—of which ultimately only two options are available: reproduction or extinction.

If you have ever had the pleasure to raise turkeys-well no science is required to understand the proposition of hardwired social behaviors.

Essentially, you can take the Galliformes out the forest and prairie but one is not allowed to ignore the 100 million year old survival and behavioral traits ingrained in the modern turkey. 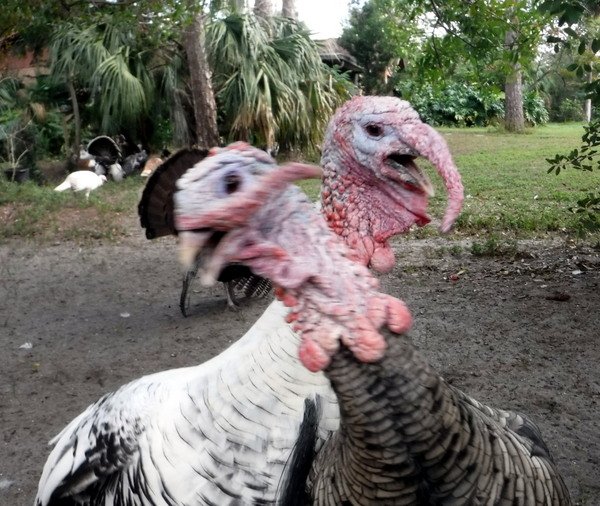 That is not to say individual birds, flocks or even different Galliformes species are all the same under those fluffy 6000-8000 feathers.

As with any animal (or person) there are individual differences in turkeys triggered by both the bird’s unique genetic inheritance and disparate influences of environment: sunlight, season, hormones, predation; by individual imprinting experiences and unique farm and forest cultures to create the nebulous concept known as ‘personality’ 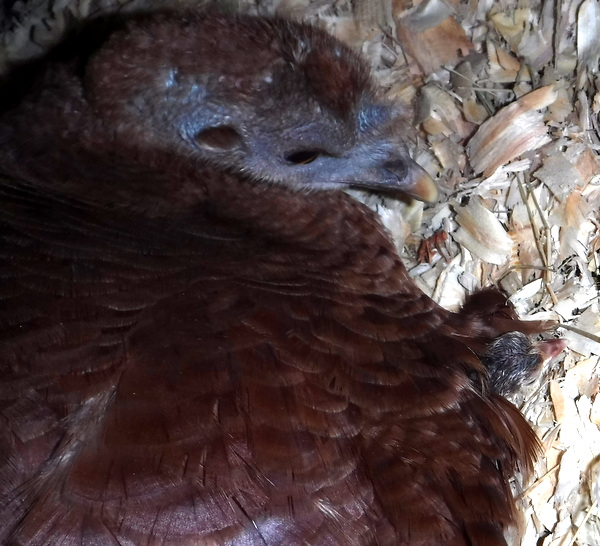 Founding principles of Turkeydom: (I made that word up)

The ability to adapt to changing environments, to reproduce, to defend offspring and protect food sources from competitors.

Modern birds and the ancestors of the first galiformes clawed their way to the top of trees during the late Cretaceous, an epoch of mind boggling variation of biogenetic experiments in the realm of feathered dinosaurs.

Teeth, beaks, flight, size, feather types, mating rituals and reduction in size were all stirred in the proverbial evolutionary kettle and the results ladled out in generous imaginative portions. A shotgun blast of evolutionary experimentations.

Surprisingly information gleaned from the fossil record presents a consistent picture in stone that flight was not a major consideration in the appearance of feathers. The first feathers appeared as an adaptation for living in cold climates and or a gaudy accessories in the mating process-using color and display to attract prospective mates. (Same process at work to this day)

Still the success of galiformes and other modern birds was no fluke.

Their small size, the ability to fly, a beak that could cut and intelligent brains -an inheritance from clever dinosaur ancestors; provided birds with an undeniable advantage during the final phase of the “Age of Dinosaurs” and the unpredictable and lethal environment of the KT transition- where 95% of all species living on the planet; both land and ocean dwellers perished forever; leaving modern birds to hold the ostentatious title as the sole surviving member of the long lived family of dinosaurs. 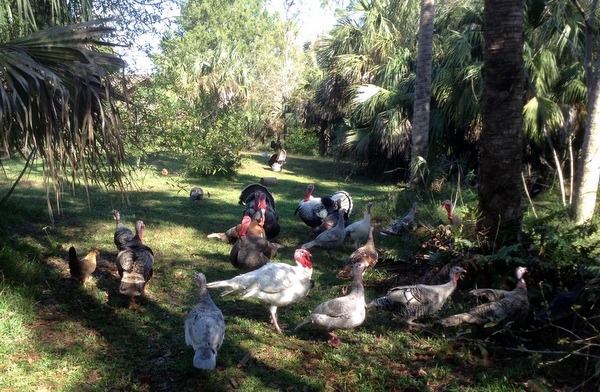 For most of galiforme history, until their world radically changed with the invention of agriculture and domestication; life in the wilderness has been and is still short and fragile. Predators abound, survival of heavy ground birds-at least in North America lay in the social organization and teamwork of the flock. A wet spring season will destroy and entire generation. (Yet life on the factory farm is not exactly a pleasant alternative: safer yes, but congested and short)

However turkeys are survivors. They are hardwired to follow their biogenetic destiny-

For example the ingrained male desire to do battle and display virility persists to this day. 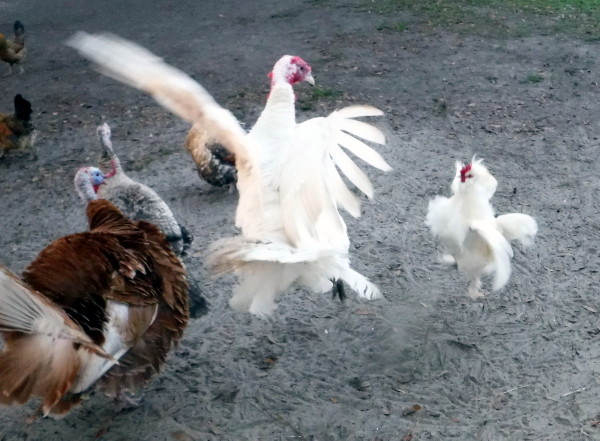 Tiny arrogant Rooster and a muscle bound White Holland sparring to see "who is who" in the flock status. (both are air born)

The winner: The turkey of course.

By studying turkeys both past and present, Darwinian anthropologists are identifying universals with regard to gender relations (spurs & size) ritual behavior, communication (calls, alarms and gobble.) Patterns that recur across all the turkey panoramas, regardless of time and place, are considered to have a strong biogenetic foundation. (Once again, no PHD is required to identify those traits-however the money must be spent by someone)

Behavioral Genetics and aggression. For the profit motive; scientists focused on research in genetics have generated a mind-numbing quantity of studies related to turkey production & increasing the size of turkeys. However general consensus is that the modern turkey has reached the maximum weight the current bone structure can support and scientists are shifting their research to the hereditary components of behavior. They have identified, for instance, several genes thought to control aggression. Attempts have been made to control that ingrained male turkey desire to do battle and hence fit more birds into a given space. More birds more profit.

I hope they fail.