Another turkey miracle
Story of a Florida summer flood 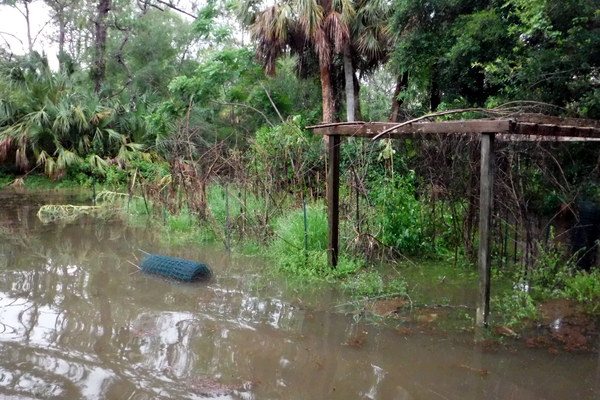 Flooded garden. I had already taken down the fence for the season

The July Flood --Florida, you have to love it. 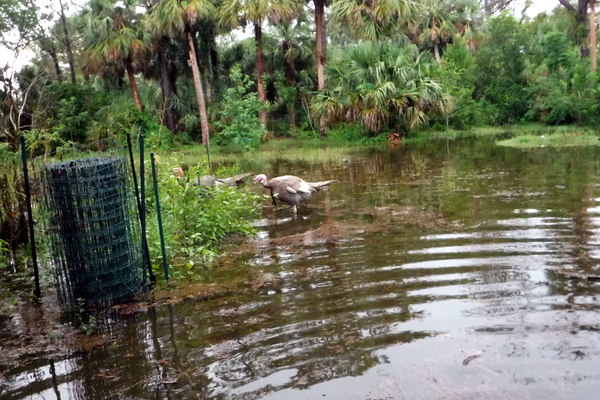 At noon, there was not a cloud in the state. Typical summer day and we casually monitored the weather satellite for any heavy summer showers we would herd the hens with baby turkeys to an inside shelter and carry our most ancient toms inside and place with the mother turkey and poults.

Only an hour later the clouds began to build over Orlando and move east towards us. I herded the baby turkeys and mothers inside as the skies blackened and thunder claps were sounding like fireworks. Still I made time to move our two oldest Tom turkeys inside.

I checked on the two Narragansett hens who had decided to nest in one of our nesting boxes in our secure pen. One of the Narragansett hens was the injured bird I found on Christmas day, mauled by a coyote. Her injuries were so horrible, that I had to keep her penned  up from January to May.-She can no longer fly, has a serious limp and I as let her out to mingle with our flock—she promptly laid down on the ground to be bred.

She chose the nest location, not I. And another hen moved in with her to double nest-not uncommon. 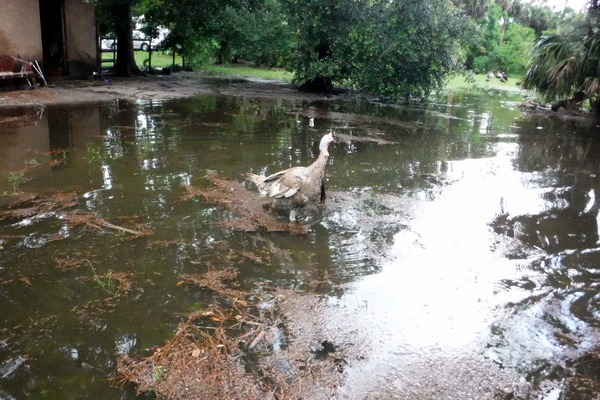 Afternoon summer showers are normal in Florida……..However, the heavens opened up and the rain lasted for over three hours. My rain gauge overflowed at ten inches.

Still I was not prepared for the water in our yard and flooded streets. The water was as high as last summer’s Hurricane Irma!

I knew the water would not stay high & indeed half of the water was gone by the evening but leaving all of our pens, feeders and waters flooded. 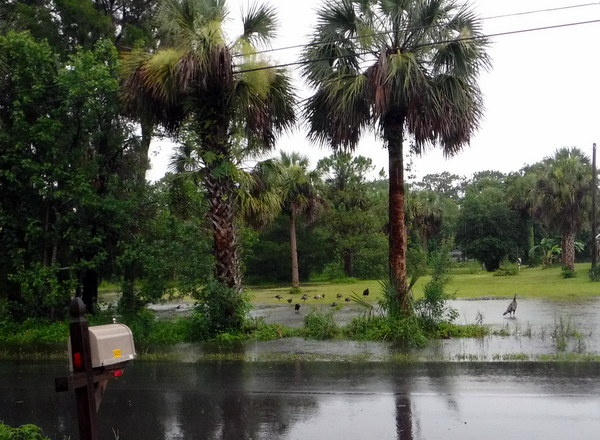 When I first walked outside, & looked at the high water I was glad that I had temporarily eradicated all the fire ants in the yard and so did not have worry about floating pods of angry ants. (I eliminate fire ant nests by mixing two unrelated nests together and the next day, both nests are dead-without using poison)

When the rain quit, I put on wading boots and walked around to inspect the damage. –The high water I had dealt with during the last two hurricanes. However to my dismay I inspected the two Narragansett turkey hens on their nest to find the eggs under water. 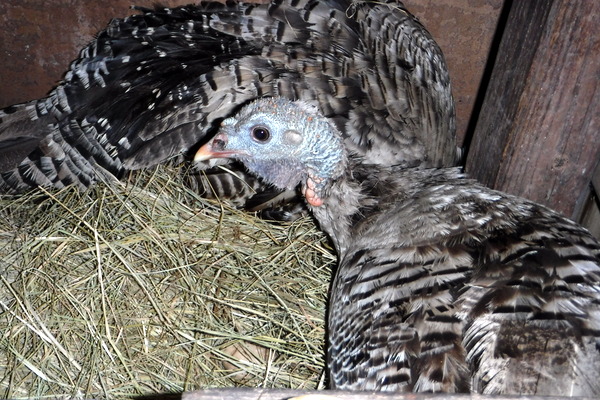 The two hens who stood by their nest during h.... and high water.

The two turkeys were standing on their nest above the eggs, however all of the eggs were in water, most completely submerged-a few were only partially submerged.

I knew the eggs were finished-a sad turn of events because they were due to hatch in only five days.

I had two broody chicken hens in nest boxes (high and dry boxes) and put the cold eggs under the chickens to warm up-although I was certain the eggs had drowned.

Next I retrieved an armload of hay and forced it under the two turkey hens who still stood in water. Packing the hay under the birds, finally I had to lift the hens and pack hay under them, so they could lie down again. Lastly I place to fake (ceramic) eggs under the two “flooded” hens to prompt them to sit in the hay.

By sundown, I was able to remove the warm turkey eggs from the chickens and place them back under the turkeys. But were the eggs alive? 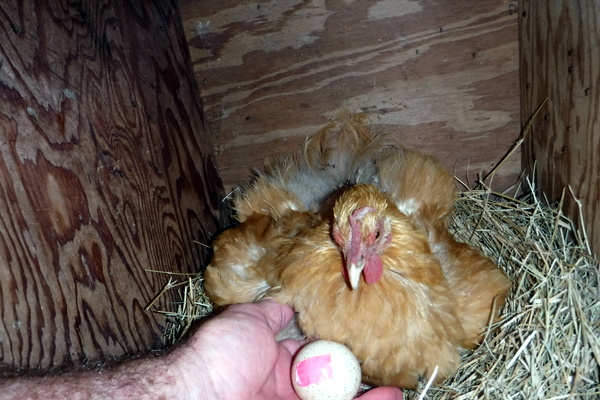 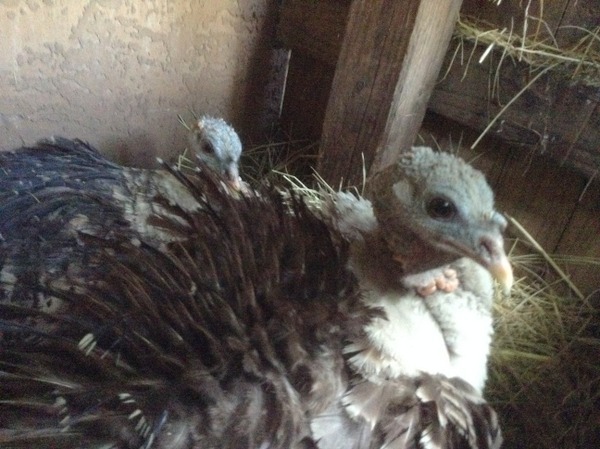 A week later & the hens acting defensive because? 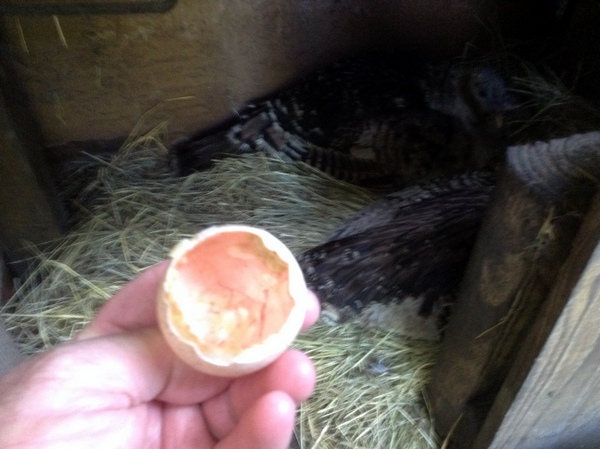 A week later—four of the ten eggs hatched. The other six eggs were placed in an incubator however they did not hatch. ---Actually, during the summer heat—hatching four out of ten eggs is about average hatch rate. 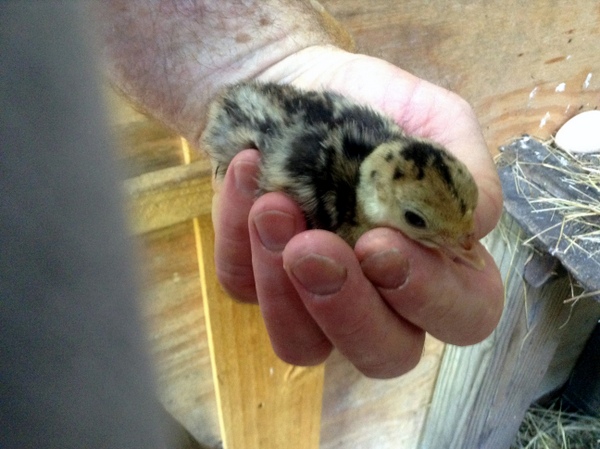 One of the four poults that survived the July Flood